Back on Track After ACL Repair

Back on Track After ACL Repair 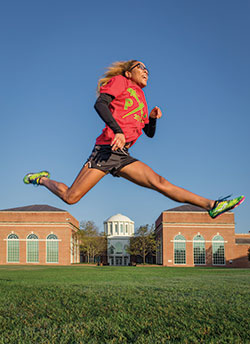 New ACL Repair Surgery Gets Athletes Back in the Game

Running in the esteemed Penn Relays is every high school track star’s dream. Maryland teen Kaniya Brown lived that dream her freshman, sophomore and junior years, but doctors told her a knee injury would block her as a senior.

Her injury, suffered while playing soccer for Henry E. Lackey High School in Indian Head, Md., was serious. Tears of the anterior cruciate ligament (ACL) are among the most common sports injuries. While surgical procedures have helped many athletes of all abilities resume their favorite activities, the methods are far from perfect. Indeed, recent studies show that many people who undergo conventional ACL reconstruction procedures begin to suffer painful arthritis- like symptoms, forcing them to give up sports involving running and jumping.

Kaniya could have been one of them. When an MRI in September 2014 confirmed a torn ACL, her orthopaedic surgeon said she would not be able to run competitively after conventional surgery. Kaniya wouldn’t settle for that, partly because she was determined to have another go at the Penn Relays before starting college.

“In this procedure,” he says, “we put a Kevlar®-laced, braided suture around the repaired ligament to provide additional support. Functioning much like a knee brace, located only inside the joint, this innovative suture helps patients recover faster.” 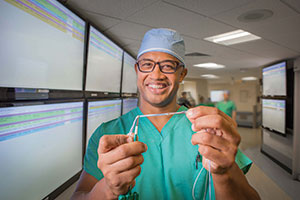 “When she first came to see me,” he says, “she told me she really wanted to compete in the Penn Relays again. It was only five months away, but she was a great candidate for the procedure.” He performed the surgery in October, and two weeks later, Kaniya was walking and able to return to school. She began physical therapy the following week. Dr. Douoguih says, “Now, her knee is operating like a normal knee. By all measures, it was an absolute success.”

A year later, it’s almost as though the ACL injury never happened. “I’m running and can play soccer again,” reports Kaniya, now a freshman at the University of Maryland-Eastern Shore. “I’m also looking forward to trying out for the track team when the outdoor season begins in March.” Kaniya hopes to compete in the 200- and 400-meter dash events, and the 4x400 and 4x800 relays.

She adds that the only injury-related pain she experiences comes when there’s a change in the weather—a common side effect of many joint surgeries. “My knee tells me when it’s going to rain,” she says with a laugh. “It’s pretty reliable.”