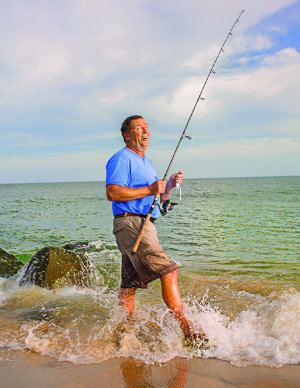 A lifelong smoker who had previously undergone a carotid endarterectomy for plaque build-up and blockage in the carotid artery in his neck, Kevin Dougherty knew the underlying cause of his constant leg pain was likely peripheral vascular disease (PVD). The potentially serious but treatable circulation problem occurs when the vessels that supply blood flow to the legs are narrowed. PVD is typically caused by atherosclerosis, or plaque build-up inside the vessel walls.

The blockage was reached through a small puncture in the groin area. The same-day procedure in March allowed Kevin to walk out of the hospital with less pain and cramping than when he walked in.

“A lot of people may be experiencing leg pain and not know the cause of it,” explains  Dr. Woo. “If you have any concerns, it is important to talk to your doctor or make an appointment to see a vascular specialist. Without treatment, severe PVD can lead to worsening conditions, including dead tissue, gangrene, and even possible amputation of a limb.”

Kevin is grateful for both Dr. Woo’s care and expertise. “The amount of respect I have for Dr. Woo and his staff is immeasurable,” he says. “He is an amazing doctor, and I would recommend him to anyone.”

“My right leg feels great,” he adds. “Before, I couldn’t even walk a block. Now I can walk a half mile or more, and I try my best to keep up with my six grandchildren.”

If you or a loved one is experiencing symptoms of peripheral vascular disease, schedule an appointment with one of our specialists at
202-877-3627.

YOU MAY BE AT RISK FOR VASCULAR DISEASE IF YOU:

To detect the disease early, MedStar Health has partnered with Dare to C.A.R.E. to offer FREE vascular screenings. Screenings are quick and pain-free, using ultrasound technology. Schedule your screening today, at 410-573-9483 ext. 202 or 203.