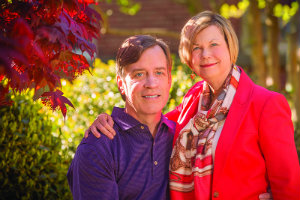 Steven Jones, 61, could have lost his life when his unique mix of symptoms baffled another hospital. Fortunately, his wife, Sandra Swain, MD, medical director of Washington Cancer Institute at MedStar Washington Hospital Center, knew exactly what to do. Within hours, she had Steven transferred to the MedStar Heart & Vascular Institute at her place of work, where experts quickly revived hope and health.

The drama began in the early hours of a wintery Wednesday morning, when Steven, who was cleaning up after the couple’s kitchen remodelers, finally called it quits for the day. Using strong chemicals, the retired Treasury Department executive was startled but not alarmed when his heart suddenly started pounding. Not feeling well, he blamed the noxious fumes, took some aspirin and went to bed.

Before nodding off, however, Steven wisely woke his wife, to tell her about the incident. Soon afterward, his breathing became labored, prompting her to pack her husband in the car and head to the nearest emergency room.

It was the right decision.

The couple arrived at the closest hospital at 3 a.m., where hospital staff gave their new patient a nebulizer to help ease his breathing. They also performed an ECG to get a snapshot of how well his heart was functioning.

But despite close monitoring and medication, Steven’s condition worsened. He lost consciousness and was placed on a ventilator, prompting the ever-more-anxious Dr. Swain to call colleagues at the Hospital Center. She was soon working with Andrew Shorr, MD, pulmonologist and medical director of the Hospital Center’s Medical Intensive Care Unit, on an emergency transfer for her husband.

Her motivation wasn’t solely based on familiarity, but on facts: MedStar Washington Hospital Center, founding hospital of MedStar Heart & Vascular Institute, is a major referral center for the region’s most complex cases, highly respected in pulmonology and nationally ranked in cardiovascular care and surgery.

At 2 p.m. Thursday, Steven was admitted to the Hospital Center where Dr. Shorr was on duty.

“Steven was clearly in shock, with low oxygen and blood pressure levels,” he says. “However, his symptoms didn’t fit the original hospital’s explanation of chemical inhalation. So we started from scratch to try to find the root of the problem.”

In a breakthrough moment, one specialist detected a heart murmur, confirmed by a cardiologist. Throughout the evening, Steven underwent several sophisticated tests, including two different types of echocardiograms, to further define what was happening. By 10 p.m., the team had the right diagnosis: a sudden rupture of the mitral valve, which allowed extensive fluid to build up in his lungs.

“Most of the cords that hold the valve flap in place ruptured, causing a torrential backward flow,” explains cardiac surgeon Ammar Bafi, MD, an expert in mitral valve repair. “While I’ve encountered this situation before, it’s quite rare.”

And quite dangerous. Before Dr. Bafi could repair the valve, Jones needed an intra-aortic balloon pump to stabilize his heart. That was inserted at 2 a.m. Four and a half hours later, Dr. Bafi successfully removed the damaged part of Steven’s valve, reconstructing what was left using the patient’s own tissue. He then inserted a ring, the only foreign material used in the procedure, to narrow the opening so the valve leaflets could close perfectly.

“Steven was very lucky,” Dr. Bafi says today. “The other hospital may not have discovered the real problem in time, or have had the right resources and staff to mobilize quickly, 24 hours a day.”

But the expertise and experience of Dr. Bafi and the team were the real keys to Steven’s successful recovery, and to Dr. Swain’s personal appreciation of MedStar Washington Hospital Center.

“MedStar Heart & Vascular Institute is a fabulous place with extremely professional, engaged and passionate people,” she states. “Though I knew from everyone else that the whole surgical team was exceptional, I was just amazed.”

“I was on the edge of death and, without batting an eye, they figured it out, fixed it, and within days, I was up walking around,” he says. “I am forever grateful.”

On May 28, MedStar Washington Hospital Center announced the single largest gift in MedStar Health’s history: $10 million from Nancy and Harold Zirkin, designated for the new Heart Hospital. The world-class, 164- bed facility, to be completed next summer, will be the first and only in the nation’s capital dedicated exclusively to cardiovascular health.

“Nancy and I share an abiding respect for this city, where we have enjoyed success in our careers,” says Mr. Zirkin, a third-generation Washingtonian who was only 15 when his father died from a heart attack. “So when we learned about the vision of MedStar Heart & Vascular Institute, and its important alliance with Cleveland Clinic, we saw an ideal opportunity to share our success in a way that would benefit the entire community.”

“We are deeply grateful for the Zirkins’ generosity,” says Hospital Center President John Sullivan. “This gift will make a huge difference in the lives of the people in our region and beyond for many years to come.”