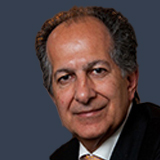 Spiros Dimolitsas was appointed Senior Vice President for Research & Chief Technology Officer at Georgetown University in July 2011. In this newly created role, he leads Georgetown’s development of innovation alliances and partnerships with industry, universities, and national laboratories domestically and overseas to address complex socio-technical problems of our time in such fields as health, security and sustainability. He works collaboratively with leaders across the University to promote research, secure investments in University-based programs, and oversee multi-disciplinary and multi-institutional research programs, and the Office of Technology Commercialization.

Prior to this role, Dr. Dimolitsas was Senior Vice President and Chief Administrative Officer of Georgetown University from November 2001 until July 2011. In that role he was responsible for a number of functions that included facilities, information technology, public safety, technology commercialization, human resources, and student dining and housing among others.

Dr. Dimolitsas held other positions before joining Georgetown University. Between 1995 and 2001, he served as Senior Executive for Engineering and Associate Director of the Lawrence Livermore National Lab (LLNL), an applied-science national security organization. In that capacity, Dr. Dimolitsas’ 2,500-person division led the engineering design of the world’s largest laser (the National Ignition Facility); and the design, fabrication and fielding of systems for cyber operations, environmental, energy and counter-proliferation related to nuclear, biological, and chemical weapons.

Prior to LLNL, Dr. Dimolitsas held a variety of management positions with the Communications Satellite Corporation (Comsat), where he pioneered technology related to voice and data communications over fixed and mobile networks. At Comsat, he also led the development and implementation of several international telecommunication systems and standards. Prior to Comsat, Dr. Dimolitsas worked with the United Technologies Corporation and the Mayo Clinic in the semi-conductor and biomedical industries, respectively, in the United States and Europe. He also consulted with the Smart Technology Venture Fund, and has served on the Board of Directors of Maxoptix Corporation and Breece-Hill Technologies.

Dr. Dimolitsas’ expertise in large-scale science and technology, high-tech/high-risk project management and technology commercialization has formed the basis for advice that has provided on innovation and on complex-systems risk management to the US Government and others. Dr, Dimolitsas is a member of the Lawrence Livermore National Laboratory Engineering Review Committee, chairs the board of advisors of the Leidos Biomedical Research’s Frederick National Laboratory for Cancer Research, in addition to being a member of the board of the MedStar Health Research Institute.

Dr. Dimolitsas holds a B.S. in Theoretical Physics with Honors from Sussex University in England; a M.S. in Nuclear Engineering from Imperial College and Queen Mary College –London; and a Ph.D. in Electrical and Computer Engineering from Sussex University. In 1992, he received the Institute of Electrical and Electronics Engineers outstanding achievement medallion, and in 1995 was elected Fellow of the Institute. In 2013, he was inducted to the National Academy of Inventors. He has published more than 60 peer reviewed scientific papers and holds eight patents in the field of data and encrypted mobile communications.