Be proactive about your prostate health. Know your risk.

About 1 in 8 men will receive a prostate cancer diagnosis during their lifetime. Although it is the second leading cause of cancer death in American men, most will make a full recovery when the disease is caught early. Being aware of your risks and ensuring timely screening can make all the difference. Our experts at MedStar Georgetown Cancer Institute are here to help.

1 in 8 men will be diagnosed with prostate cancer

3.1 million men in the U.S. are prostate cancer survivors

Should you get screened?

Early detection is key to beating this disease.

Most insurances cover prostate screenings for men 50+ years old, or those at increased risk. If you fall into a high-risk category, you should be checked annually starting as early as age 45. Some doctors may even suggest you have a baseline PSA test in your 40s as a benchmark. Be sure to check with your insurance provider to determine your individual coverage.

You may be at increased risk if you:

At what age should I start asking about PSA screening? 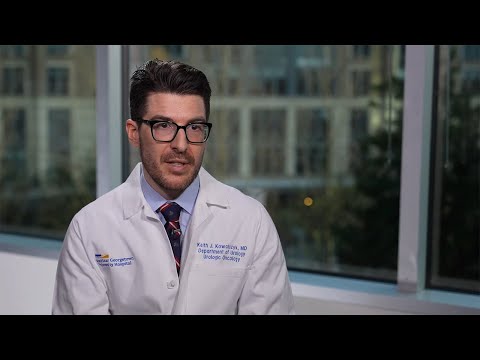 Talk to your doctor to see if a PSA test is right for you.

To schedule an appointment,

Stage 4 prostate cancer survivor urges every man, for the sake of all who love him, get a screening. “Life is precious.”

Euvon Jones admits he took his health for granted. "I had great health all the way into my late 50's," says the Accokeek, Maryland resident. "I worked, went to the gym, and had an active life. I didn't think it was necessary to check on my health or get screenings." But when a limp from hip pain and diminishing appetite and energy levels could no longer be ignored, he went to the doctor. The news was not good. At age 59, Euvon was diagnosed with stage 4 prostate cancer. "Getting that diagnosis just about floored me," he says.

Euvon’s PSA (a blood test used to screen for prostate cancer) was 398. A normal PSA is 4 for a man his age. Euvon’s cancer was most likely silently growing for years, and a screening could have caught it. Prostate cancer is the second leading cause of cancer death in American men. One in eight men will receive a prostate cancer diagnosis during their lifetime, but most will make a full recovery when the disease is caught early. Being aware of your risks and ensuring timely PSA screening can make all the difference.

Euvon's cancer had spread to his lymph nodes, bones, hip, and back. He and his wife, Janet, began researching treatment centers which led them to Nancy Dawson, MD, director of the genitourinary medical oncology program at MedStar Georgetown University Hospital. "Dr. Dawson was so professional. What I like about her is that she doesn't pull punches. She walked us through the different treatment options," Euvon says.

Dr. Dawson put Euvon on Provenge, a medication that is tailored to match each patient's immune system. MedStar Georgetown, through the Georgetown Lombardi Comprehensive Cancer Center, the region’s only NCI (National Cancer Institute)- designated comprehensive cancer center, participated in the clinical trials that led to Provenge's Food and Drug Administration approval in its current use as a frontline therapy.

The treatment process involved removing some of Euvon's white blood cells and sending them to a lab, where staff exposed them to a protein that stimulates the cells and programs them to fight prostate cancer. The transformed cells were then infused back into Euvon's body. "I've got a lot of warriors inside of me," Euvon says.

Euvon and his family are thrilled with the results. "I can't say enough about Dr. Dawson and the entire MedStar Georgetown team. They are really on the cutting edge of prostate cancer treatment and care," he says.

"Prostate cancer doesn't give you symptoms when it's confined to the prostate. By the time prostate cancer gets big enough to push on your urinary system, it's already advanced, so you don't want to wait to get screened," Dr. Dawson explains.

During his journey with cancer, Euvon says he was blessed to have the support of his family. His wife researched the disease, and as she studied, she began to write about it. The result was a book, The Trail of Stage IV Prostate Cancer, A wife's case for faith, hope, and help.

"This book has become a doorway to talk with other men about prostate cancer. I want others to receive the benefit of what I went through," he explains. Euvon and Janet travel all over the country presenting seminars, helping people live healthier lives, and enforcing the message "men get your checkups!". "Men need to know how important it is to get a screening," he says. "The reality is simple: life is precious."

Talk to your doctor to see if a PSA test is right for you.

To schedule an appointment,

The Choice Act allows veterans in our community to take advantage of our advanced screening and treatment options. We look forward to seeing you.

Use My Current Location