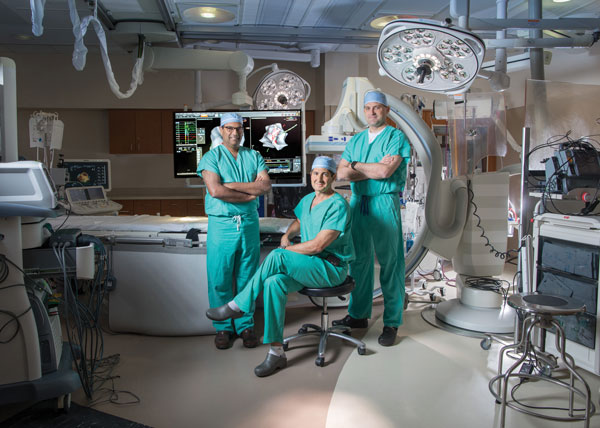 From the numbers affected (up to 10 million adults) to the related deaths (130,000) to the expense ($6 billion)1, atrial fibrillation exacts a considerable and growing national toll each year. Experts predict that arrhythmia management, especially for AFib, is on track to dominate cardiology care over the next decade.

“AFib today is a major clinical problem…one that keeps snowballing. We are seeing more and more cases each year, in adults of all ages, and we are increasingly appreciating how variable this arrhythmia’s symptoms and danger can be,” says Zayd Eldadah, MD, PhD, director of the MedStar Heart & Vascular Institute’s Cardiac Electrophysiology Program, the region’s largest cardiac electrophysiology center and a national leader in AFib research and care. “We now recognize that AFib is a progressive condition that requires thoughtful, comprehensive, long-term management, achieved best via effective collaboration among referring physicians, cardiac electrophysiologists, and even cardiac surgeons.”

The good news is that MHVI is showing the way with more—and more effective—options than ever before, including multiple clinical trials (see chart, page 6). The key is finding the best solution for each patient, no matter where he or she falls along the spectrum.

Comprehensive Care for a Complex Condition

Someone with AFib is about five times more likely to suffer a stroke than the general populace, according to the American Heart Association®. Strokes in AFib patients also tend to be devastating, often with more severe deficits. First-line treatments typically include an anticoagulant, often with an antiarrhythmic to control AFib’s hallmark irregular heart rate and rhythm. The combination works for many, often for years, and can be well-managed in the community setting.

But drug therapy is limited. That’s when the expertise of an advanced arrhythmia management center like MVHI—which offers the full breadth and depth of AFib treatments—becomes essential to both a patient’s quantity and quality of life.

Anticoagulation is an essential component of AFib management but, even with today’s safer and more effective therapies, it’s not without its problems.

“The long-term use of any type of blood thinner is complicated, especially in combination with other prescription and over-the-counter medications,” says Dr. Taylor. “As more patients are diagnosed with AFib and put on anticoagulants at an earlier age, we increasingly and carefully consider the risk of bleeding problems. And with older, frailer patients, there is always the concern of falls and a serious bleed.”

In fact, one out of 10 AFib patients on anticoagulation therapy will have a major hemorrhagic event at some point in their care, requiring transfusion and a termination of anticoagulation.

Additionally, around two out of 10 will experience smaller bleeding episodes that remain clinically relevant, such as nose bleeds. While many physicians view such bleeds as a minor consequence of care, many patients see them as a major problem, often reducing their dose on their own or simply stopping the medication altogether.

“Whether from non-compliance, sub-therapeutic dosage, or contraindications, up to 40 percent2 of AFib patients today are inadequately protected,” says Manish Shah, MD, director of MedStar Washington Hospital Center’s Clinical Cardiac Electrophysiology Fellowship Training Program. “Yet it doesn’t have to be like that.”

Stopping Strokes Before They Strike

Over the past decade, a mechanical device that basically offers the same protection as anticoagulants but without the risk of bleeding has emerged as an important and successful alternative for certain patients. Called occluders, the mesh-like implantable devices physically trap clots where they originate in the Left Atrial Appendage (LAA), the small sub-chamber responsible for the majority of AFib-related strokes. This keeps them out of the bloodstream and away from the brain.

Starting with WATCHMAN™, the first commercially available LAA occluder, and continuing through subsequent iterations, MHVI has been at the national forefront in testing and adopting the potentially lifechanging devices. To date, MedStar Washington Hospital Center and MedStar Union Memorial Hospital have implanted more than 200 WATCHMANs.

Now MHVI is part of the clinical trial for the device’s next generation, WATCHMAN FLX™. Out of a total of 40 institutions, MHVI was only the third site in the nation to start enrolling patients.

“Our participation in this clinical trial is yet another example of how comprehensive the AFib program at MHVI really is,” says Dr. Shah, principal investigator for the new trial and its predecessors, the leading implanter of WATCHMAN devices regionally, and a national course director for physician training. “Through these and other studies, we’re providing patients with access to cutting-edge devices and treatments before they are widely available.”

Dr. Shah is also PI for several other occluder trials, including Amulet™ and Coherex WaveCrest®. They are designed to evaluate variations in size, ease of placement, anticoagulation requirements and efficacy for FDA consideration in the hopes of making the option applicable to more patients. At MedStar Union Memorial Hospital, John Wang, MD, is PI for another trial, ASAP-TOO. This study evaluates the safety and effectiveness of the WATCHMAN device for non-valvular AFib patients deemed unsuitable for anti-coagulation therapy to reduce the risk of stroke. “Regardless of the therapy chosen,” Dr. Shah states, “everyone with AFib needs to be evaluated for stroke protection.”

Restoring Rhythms
In addition to strokes, AFib can potentially cause heart failure, heart attack or even sudden cardiac death.

When hearts beat too fast or too slow for too long—and medications cease to work—MHVI’s specialists turn to the other advanced tools in their armamentarium.

“For a patient with newly recognized atrial fibrillation, we often start with cardioversion, a quick electrical fix to ‘reset’ the heart rhythm,” says Dr. Eldadah. “This can be augmented by medical therapy to control heart rate and preserve normal heart rhythm. Catheter ablation was historically the next step when medical therapy was insufficient or not tolerated, but now, the increasing efficacy, safety, and simplicity of ablation may elevate it to be considered first-line therapy to suppress the arrhythmia.”

When ablation is the answer, MHVI is the region’s most experienced site. Its experts at the Hospital Center and Union Memorial successfully performed the procedure more than 600 times last year alone, using either radiofrequency or cryoablation.

And now the MHVI network is helping to advance understanding of the procedure and its efficacy even further.

“MHVI is the only site in the region to participate in a new trial evaluating the use of cardiac ablation as the first line of defense against AFib,” says Glenn Meininger, MD, medical director of Cardiac Electrophysiology services for the institute’s Baltimore region. “Called STOP AF First, the study will compare patient outcomes following cryoablation with those of patients on antiarrhythmic medication alone. The study will help us to understand if ablation should be initiated sooner.

When All Else Fails
When all other attempts at rhythm and rate control have failed, MHVI offers a variety of cutting-edge, hybrid treatments. While more invasive, they often succeed in returning patients to a quality of life they thought was forever out of reach.

The first is convergent atrial fibrillation ablation. Developed just recently, the procedure uses a combination of epicardial and endocardial approaches to block the errant electrical currents that cause atrial fibrillation, including the posterior left atrial wall. Convergent therapy can be performed with an EP specialist and cardiac surgeon working sequentially, or in two separate procedures. The convergent procedure is often combined with a thorascopic closure of the left atrial appendage to increase the effectiveness of the procedure as well as reduce the long-term risk of stroke.

“A surgeon can get to certain areas of the heart better than a cardiac electrophysiologist can and vice versa,” says Christian Shults, MD, an MHVI cardiac surgeon at the Hospital Center and proponent of the new technique. “By working together, we can reach more of the problem areas and produce very good, long-lasting results.”

Since the advent of the hybrid therapy, MHVI has emerged as the second highest volume center in the U.S., with 130 procedures performed at MedStar Washington Hospital Center and MedStar Union Memorial Hospital.

That distinction may have played a role in MHVI’s selection as a site for the multi-center CONVERGE trial, which stopped enrolling patients at the end of August.

“We compared standard catheter ablation head-to-head with the convergent approach to see which works better for patients with long-standing, refractory, persistent AFib,” explains Dr. Shults. “The goal was to determine if convergent therapy should be considered earlier in the disease process.”

For patients with atrial fibrillation already undergoing cardiac surgery, a Cox-Maze IV procedure is performed, which is the gold standard and most effective treatment for AFib. Because it requires arresting the heart and use of the heart lung machine, it is typically reserved for patients who otherwise require open heart surgery.

But regardless of where a patient is on the AFib severity spectrum, MedStar Heart & Vascular Institute has the complete arsenal of treatments and techniques to help.

“Our mission is to deliver the most appropriately tailored, state-of-the-art therapy for each individual. No patient should ever languish on outdated or ineffective care. Our aspiration as a multi-disciplinary team is not just to treat this global heart rhythm problem, but one day to eradicate it,” concludes Dr. Eldadah.