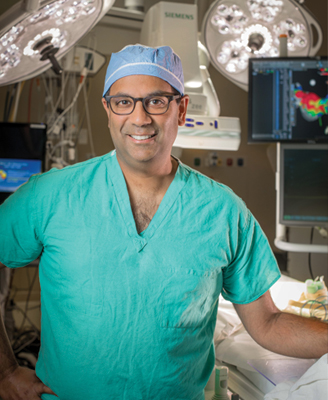 “Between 20 and 30 percent of all stroke patients have AFib, so anything we can do to reduce their risk is a huge step forward.” —Manish Shah, MD

Designed to pick up where WATCHMAN™ leaves off, the AMPLATZER Amulet device could potentially expand the pool of people eligible for the former’s ground-breaking approach to LAA closures and stroke prevention. Currently, MHVI is the only institution in Washington, D.C., Maryland and Northern Virginia to offer the alternative device.

Like WATCHMAN, Amulet is only appropriate for certain patients with non-valvular atrial fibrillation who are at high risk for not only stroke but also bleeding from long-term anti-coagulant usage.

Where Amulet differs, however, is in its reduced device length, which allows it to accommodate more diverse anatomies than the longer WATCHMAN, and in its elimination of the 45-day post-procedure blood thinner requirement. The latter is particularly relevant, says cardiac electrophysiologist Manish Shah, MD, principal investigator of the Amulet trial at MHVI, and the designated physician proctor for WATCHMAN within our metropolitan area.

“Between 20 and 30 percent of all stroke patients have AFib, so anything we can do to reduce their risk is a huge step forward,” he says. “By removing anti-coagulation from the equation, Amulet offers us another alternative to help manage stroke risk among vulnerable patients while protecting them from dangerous gastrointestinal or intracranial bleeds.”

Eligible study participants are randomly assigned to receive either Amulet or WATCHMAN, currently the only FDA-approved LAA closure device in the U.S.

The Amulet trial is currently taking place at around 50 sites throughout the U.S., Australia and Europe, with the goal of studying 1,600 patients over seven years. If you have a patient you believe may benefit from, or be eligible for, the Amulet trial, please contact Manish H. Shah, MD, principal investigator, at 202-877-7685 or Manish.H.Shah@medstar.net.