Mel George had nausea on and off for five years … the cause of which was never accurately diagnosed. While it sometimes kept him away from his job as a National Account Representative for Miller Coors, he was usually back to work after a little rest. This time was different. 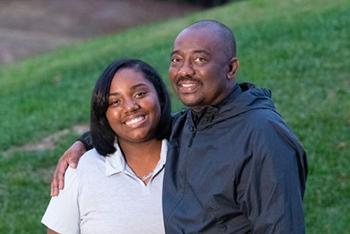 “I got so sick I could barely function,” the 53-year-old says. “The nausea was severe for weeks. I couldn’t eat … all I could do was lay in bed.” He eventually ended up at a local hospital where tests were inconclusive. He was transferred to the specialists at MedStar Heart & Vascular Institute at MedStar Washington Hospital Center.

“There I was told my heart was failing. It was not pumping at the rate it should be and my organs were shutting down,” he explains. After a series of evaluations, it was determined that George was an ideal candidate for a heart transplant. “They explained to me that finding a new heart could be a long process—probably 80 to 90 days—and I would need to stay in the hospital during that time.”

Then, on the third day of his wait in the middle of the night, George was awakened by his nurse who was crying. “A heart that was a match had just become available and they needed to take me into surgery right away,” he explains. “My nurse was a wonderful older man who took the best care of me and we shared tears. I was frightened by the thought of having my heart taken out but was thankful to have a chance to survive.”

George spent four weeks in the hospital after his surgery, during which he benefitted from extensive rehabilitation to “get me back in order,” he says. “The whole process made me feel special. It was life changing. I was treated like a king.

Today, George is doing great and looking forward to getting back to work. He is now walking two miles a day, and the former collegiate golfer chips balls regularly with his 15-year-old daughter, who has taken up the sport.  He is also developing ideas for a fundraiser to benefit the Institute. “My goal is to do whatever I can to give back. I’ve been blessed and I will always be grateful.”