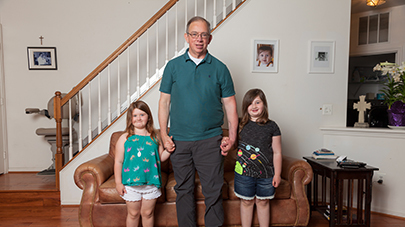 A fractured wrist proved a fortuitous twist of fate for 65-year-old William “Bill” McLaine. Ten years ago, Bill suffered a stroke. With months of therapy and his own tenacious spirit, he recovered, but with one lingering effect. While most of his left-side paralysis had receded, he still suffered from spasticity, or contraction of muscles, in his hand. Bill’s wrist was permanently flexed with his palm turned down, and his fingers clenched into a fist.

After a decade of therapy, Bill had reached a plateau and was no longer making much progress. He also tried Botox injections, which helped reduce some of the spasticity, but over time they stopped working.

“I didn’t have control of that hand at all,” Bill says. “I wasn’t able to grasp things or open doors or cabinets.” Then one day, Bill was cleaning in his garage when he slipped and fell, breaking his left wrist in two places. He and his wife, Ann, headed immediately to MedStar Georgetown University Hospital.

“I saw Mr. McLaine when he arrived at the hospital and told him that he needed surgery to repair the fracture,” says Michael W. Kessler, MD, MPH, chief of Hand and Arm Surgery at MedStar Georgetown. “I also told him I could help reduce the spasticity in his hand. A relatively simple procedure can release tendons and allow the muscle to stretch out.”

Bill was thrilled at the prospect of restoring the use of his left hand. “It was exciting, and I felt very confident in Dr. Kessler’s ability.”

In an outpatient procedure, Dr. Kessler repaired Bill’s broken wrist, with a metal plate and ten screws holding the bone in place. He also performed a tendon release, which allowed the muscle in Bill’s wrist to relax into a normal position.

“In this technique, slits are cut into nine tendons in the arm above the wrist, allowing the muscles that control the fingers to elongate,” Dr. Kessler explains. “I think many more stroke patients, as well as those with cerebral palsy, could be helped if they were aware that surgical options were available.”

After a short time in a splint and physical therapy, Bill could hold his grandchildren’s hands. “I can’t say enough about Dr. Kessler and MedStar Georgetown,” Bill says. “My wife and I are their biggest cheerleaders. It’s unbelievable after all these years to be back to normal.”