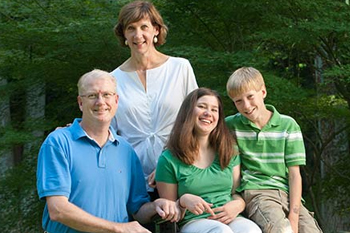 Now 19 years old, Otilia Lampman loves listening to music, reading, wheelchair basketball, swimming the breaststroke, and her brother Joseph. Like most teenagers, she lives “in the moment.” She doesn’t spend much time looking back at the beginning of her life thousands of miles away in Arad, a bustling city in the Transylvania region of Romania.

It’s hard to imagine today that a decade ago Otilia was among thousands of Romania’s lost children—given up by families ill equipped to care for them and left in unimaginable conditions in state orphanages or with foster families with few resources to share with another child.

Otilia had cerebral palsy and was living in a foster home with dirt floors and no running water when “divine intervention” interceded and changed her life.

In 1999, NRH physical therapist Marti Carroll became a volunteer for Romanian Christian Enterprises (RCE)—an organization established to help the abandoned, disabled children of Romania. On her first trip there, Carroll met Otilia, jump-starting a series of events that transformed the young girl’s life.

“Otilia was four when I first saw her—but she couldn’t sit up or walk because she had never received the therapy she needed. I evaluated her and ultimately she came to live at Darius House, the recuperative home for disabled orphan children RCE had built in Arad. By the time I returned to Romania in 2000, she was making great progress.”

When she turned seven, Otilia was growing like a weed and needed surgery to release the tendons in her legs so she would continue to progress. RCE arranged for her to have the procedure in Virginia, and found a family to care for her while she received therapy at NRH.

“My husband Scott and I are on the board of RCE,” says Lisa Lampman, “and we had asked ourselves ‘what are we going to do to help these children?’ After we met Otilia, we knew. She came to visit in 2003, and when she returned the next year for surgery, she stayed with us—and never left! In 2009, Otilia officially became our daughter.”

Otilia received weeks of therapy at NRH with “the hospital generously covering the cost,” says Lisa. “NRH made it possible for Otilia to become a typical American teenager.”

Today Otilia is a part of the NRH family, returning for periodic therapy or brace fittings to help her walk with her new crutches, and visiting her “grown-up friend Marti.”

“I feel really blessed,” Otilia says. “I’ve got a wonderful family that I love and special people in my life. And that’s the best thing in the world.”