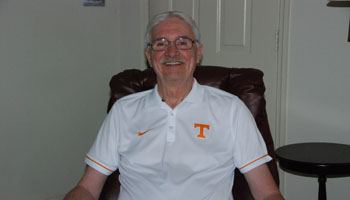 In 2006, despite experiencing a tremendous amount of tightening in his chest, Larry Washam was discharged from a community hospital. Not one to complain, Larry continued to fight through the pain until a second trip to the emergency department was necessary. As his oxygen levels continued to decline – things went from bad to worse.

As a result, Larry was immediately flown to the intensive care unit at MedStar Georgetown University Hospital. During transport to the operating room, Larry vividly recalled the team's calm demeanor, “they held my right hand and told me I’m going to bring you through this. It was unbelievable how calming that made me feel.”

A year after the surgery, Larry was again having troubles breathing. After Dr. Marshall ran a series of tests she identified a condition which included the paralysis of the diaphragm on the right side of his lungs. With another successful surgery, Larry stated, "You never forget the person who saves your life once. The difference in my case is that they saved my life twice. I can't put into words my gratitude."

For his continued care, Larry was referred to Charles Arthur Read Jr., MD. In 2015, during a routine checkup, Dr. Read noticed a nodule on Larry’s lung. Due to his limited lung capacity and other comorbidities, surgery wasn’t an option. Subsequently, Dr. Read conferred with the team at MedStar Georgetown and Brian Timothy Collins, MD on the treatment needed and decided to pursue the high intense target radiation Cyberknife procedure. Through this targeted form of radiation, Larry was able to keep the remaining functionality of his lung while removing the majority of the cancerous nodule.

Because of this exceptional care, Larry now affectionately refers to his clinician team as his "heroes" and to MedStar Georgetown as the "A-Team."