A Chiari malformation is characterized by insufficient space in the posterior fossa, or the lower bottom part of the skull, to contain the cerebellum.

When the space in this lower bottom part of the skull is smaller than it should be, the cerebellum is displaced downward, such that part of it is pushed up against the spinal cord as it exits the skull.

This, in turn, can cause problems with the brain stem, spinal cord, and cerebellum itself, in addition to blocking the normal flow of cerebrospinal fluid out of the brain.

The symptoms include a wide range of ailments, and different patients may have dramatically different combinations of symptoms. The symptoms may include:

In order to diagnose this problem, your physician will:

Treating this condition includes surgery to decompress the posterior fossa, or to make more room in the lower bottom part of the skull, so that the cerebellum is no longer pressing up against the brainstem and spinal cord. This allows for normalization of the function of these neurological structures, and unblocks the flow of cerebrospinal fluid.

The neurosurgeons at MedStar Health are leaders in the treatment of Chiari malformation, and we offer the most advanced techniques to help patients with this debilitating disease return to their productive, normal lives.

The most common operation for chiari malformation is called craniocervical decompression. The bone at the lower bottom part of the skull is shaved away to create more room. The covering of the brain, the dura mater, is opened, and a graft made of either natural or synthetic tissue is sewed in to create more space.

After the operation, although part of the skull is now missing, traumatic injury related to this bony defect is usually not a major concern, as large muscles of the neck still cover this area.

Recovery from the surgery typically takes several days in the hospital. Most patients are able to return to work in approximately 3 to 4 weeks post-operatively. 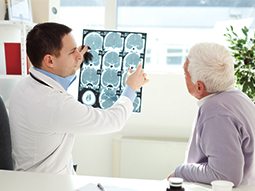 Getting the care you need starts with seeing one of our neurologists.