Constipation is a common gastrointestinal problem that is characterized by passage of small hard stools, a feeling of incomplete emptying, and straining with bowel movements. Normal frequency of bowel movements can range from as few as three times a week to as often as multiple times per day.

Constipation has many causes, which can range from simple things such as changes in diet and activity level, dehydration, or certain medications to more complicated causes such as thyroid disorders, uncontrolled diabetes, pelvic floor disorders, bowel obstruction, strictures, or malignancy.

Risk factors for constipation include older age, diet low in fiber, inactivity, metabolic abnormalities such as diabetes or thyroid disorders, and chronic opioid use.

Testing for causes of chronic constipation may include blood work, X-ray studies, or a colonoscopy.

Constipation is typically treated with a trial of fiber supplements and laxatives that will be recommended by your provider. Often these can be bought over the counter. If there is a stool impaction, an enema or digital disimpaction may be required. Additionally once the original cause of the constipation has been identified, it will be treated accordingly. 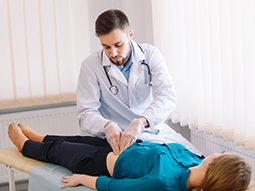 Getting the care you need starts with seeing one of our gastroenterologists.