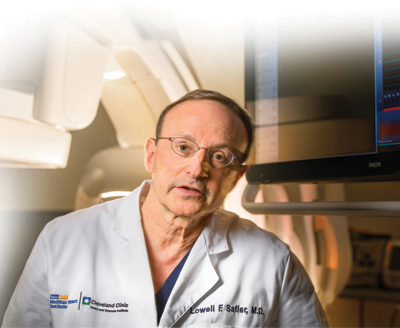 “Results demonstrate a 50 percent reduction in the incidence of repeat ischemic stroke among this population when treated with the occluder versus medical management.” —Lowell Satler, MD

After years of patient follow-up data, a lingering doubt among cardiologists and neurologists has finally been put to rest: The AMPLATZER™ PFO Occluder is better than anticoagulation alone for patients with stroke who have a patent foramen ovale (PFO). In October 2016, the FDA approved the device after reviewing data from 1,000 patients participating in the longitudinal, nationwide RESPECT trial. MedStar Washington Hospital Center, under the direction of principal investigator Lowell Satler, MD, was a lead site for RESPECT, enrolling the first patient into the seminal study.

“This green-light marks a major shift in how we manage stroke patients with a proven PFO, particularly those younger than 60,” says Dr. Satler, an interventional cardiologist and medical director of the hospital’s Catheterization Lab. “Results demonstrate a 50 percent reduction in the incidence of repeat ischemic stroke among this population when treated with the occluder versus medical management.”

Robert Laureno, MD, chief of Neurology at MedStar Washington Hospital Center, participated by evaluating potential study participants before and after PFO implants. He calls the occluder a “valuable and viable new approach.” “Previously, we only had two options for preventing subsequent strokes due to PFO,” he says. “Lifetime anti-coagulation or anti-platelet therapy, or major open surgery to close the hole. Now specialists have another alternative.”

Deciding who is an appropriate candidate for the PFO occluder is a complex task, best achieved by a cardiologist and neurologist working together. Patients with cryptogenic stroke must first undergo a series of tests to rule out other potential causes, including atrial fibrillation (see related story below) and carotid atherosclerosis. Once PFO has been pinpointed as the likely culprit, a patient is further evaluated to assure the opening is anatomically suitable for closure.

If you have a patient you think may benefit from this device, contact the MedStar Structural Heart and Valve Disease Center, at 202-877-5975.