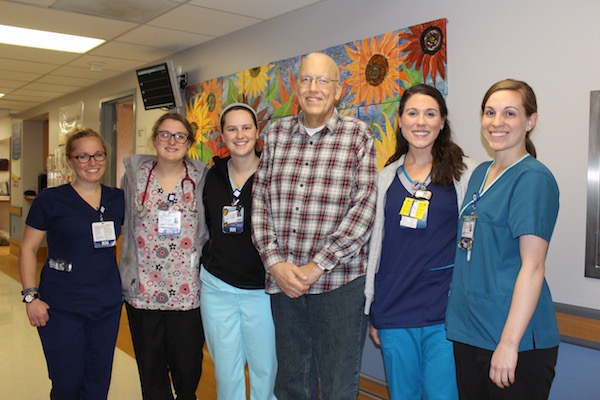 (Washington, D.C.) – April 21, 2016 is a day Thomas Koepnick, 68, chuckles about when he calls it his “birthday.”  The date, blocked out, highlighted and outlined in a brightly colored starburst on the calendar, hangs on the wall in his room at MedStar Georgetown University Hospital the day before he prepares to go home.

“That’s the day they call my birthday because it’s the day I got a brand new immune system,” said Koepnick as he reflected on the transplant intended to fight off his Acute Lymphoblastic Leukemia or ALL with an army of new cancer-fighting stem cells.

Back in November 2015 Koepnick of Annandale, Virginia was feeling run down and had a persistent cough.  A trip the emergency room and a series of tests revealed his leukemia.

“Of all the therapies available, a stem cell transplant has the greatest chance of curing acute lymphoblastic leukemia,” said Scott Rowley, MD, the program’s director.  “Cure rates can be as high as 50 to 60 percent with a stem cell transplant; standard chemotherapy only offers adult patients a five to 30 percent cure rate.  This type of leukemia is sensitive to a new immune system, which we hope will attack the cancer.”

The father of a grown son and daughter, physicians at MedStar Georgetown looked to Koepnick’s son Charlie to be his stem cell donor. He was an excellent match.

Thomas Koepnick checked into the hospital on April 15 and began a rigorous course of chemotherapy to wipe out his immune system.  Six days later, Charlie Koepnick had minor surgery to harvest stem cells from his pelvis bone. The next day, with Charlie in the room, those cells were transplanted into Thomas with a procedure that looks like a blood transfusion.

“I was glad that I was compatible and more than happy to do this for my dad,” said Charlie Koepnick, 34, a letter carrier with the U.S. Postal Service who lives in Ohio.   “I watched the cells being transplanted into him that I’m hoping will save his life. It was a moving experience.  While he was in the hospital we played some cards and online chess to pass the time, like we used to do when I was a kid.”

“Mr. Koepnick is a star,” said Dr. Rowley.  “He has had few side effects and continues to do exceptionally well with his transplant.”

“The real work of the allogeneic transplant happens in the next three months to establish the donor cells in his body and develop tolerance between the donor and the recipient.  Our hope is to get 100 percent of his son’s immune system established in his bone marrow while we continue to watch him closely for side effects and complications,” said Dr. Rowley.

MedStar Georgetown has been performing autologous bone marrow transplants, using a patient’s own bone marrow, since 2013 thanks to an affiliation with Hackensack University Medical Center (HUMC) to establish the Bone Marrow and Blood Stem Cell Transplant Program. Hackensack’s program at its John Theurer Cancer Center is among the nation’s largest programs performing more than 5,000 blood and marrow stem cell transplants since its inception in 1990.

Thomas Koepnick’s stem cell transplant was the first using donor cells since the 2013 re-opening of the BMT program at MedStar Georgetown.

“This allogeneic case demonstrates the maturation of the skills of the team members dedicated to our stem cell transplant program as we restart it here at MedStar Georgetown, “said Dr. Rowley. “A transplant that relies on the cells from a donor is much more complex than the transplant using a patient’s own cells.”

The partnership created a program that combined experience with the world-renowned expertise of the Georgetown Lombardi Comprehensive Cancer Center, the only cancer program designated by the National Cancer Institute in the Washington, D.C., region.

“I have worked with four to five thousand stem cell transplant patients in my 30 year career, and many of the team at MedStar Georgetown have similar experience,” said Dr. Rowley.  “Pashna Munshi, MD, who is extensively trained in allogeneic transplantation, joined our program this year and David Vesole, MD, PhD, brings his international reputation in the management of multiple myeloma to our team.  So, while this is the first donor stem cell transplant under the new program at Georgetown, I work with a fantastic team of other physicians, nurses, nutritionists and physical therapists who have specialized in providing stem cell transplants for many years. This is a treatment that has progressed from being an experimental treatment to one that is standard for many types of cancer and serious blood disorders and the success rates have increased significantly.”

Thomas Koepnick looks forward to getting back to a regular exercise routine. He had been walking four miles a day before his leukemia diagnosis.

“I know I will have some restrictions to protect me from infections, but I have a lot to look forward to.  That includes hopping on an airplane again to see my grandkids. Fewer restrictions on food will also be nice.  And I’d love to be able to get to another Nats game. In the meantime I’ll be watching them on TV.”

“We will know for certain in about a year if the bone marrow transplant was successful. In the meantime we are staying positive and keeping a good attitude,” said Charlie.