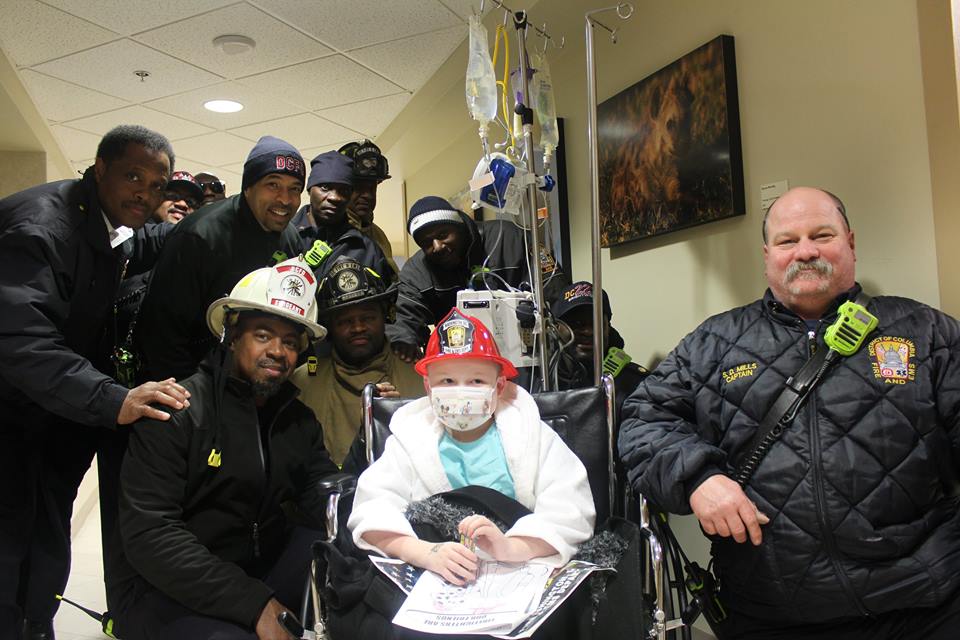 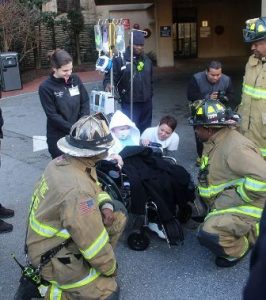 “It was amazing – They even brought a fire truck! It was the coolest part,” said Hunter.

Wearing a robe and a mask, and given little information about the surprise, Hunter was wheeled down to the circle by the Emergency Department. Battalion Fire Chief David McLain and his team from Engine 5 and Truck 5 created a welcoming tunnel for Hunter. When the automatic sliding doors opened, the firefighters cheered and gave high-fives to Hunter as he made his way out to see the fire truck.

“You couldn’t see it, but his face really lit up behind the mask,” said Jessica Uze, a child life specialist who helps children cope with being in the hospital. “Hunter has spent so much time in the hospital for serious things, and having real-life community heroes visit and remind Hunter that the world is out there pulling for him was really sweet!”

After firefighters from Hunter’s hometown in Livonia, Louisiana contacted D.C. Fire and EMS about this “brave young boy,” Uze and Hunter’s mother quickly coordinated the surprise visit. Hunter suffers from chronic intestinal pseudo-obstruction, and received a transplant for his small and large intestine in November 2016.

“It was so special that the firefighters went out of their way to do something for a child they didn’t know,” said Kymberly Scarborough, Hunter’s mother. “I knew this was something for Hunter to look forward to, so keeping the surprise a secret was worth it!”

“I think that kids around Hunter’s age enjoy visits from role models and heroes. These visits break the routine of their long and hard medical journey, which is often riddled with uncomfortable interventions and situations they have no control over,” said Dr. Nada Yazigi, Medical Director of Pediatric Liver Transplantation, who was seen on the unit wearing one of the red firefighter hats.

Hunter wore a firefighter hat during the visit and learned about the special equipment firefighters use to stay safe in a fire. He later asked some of firefighters to follow him back to the pediatric unit to meet some of his friends, and the firefighters handed out more firefighter hats to other young patients to brighten their day.

“I was crying because I was so happy,” said Hunter. “I didn’t know I would get to meet firefighters while I was in the hospital!”