Biker is back in the saddle after rebuilt hip.

After three decades in the Marine Corps and 14 years as a triathlete, it was a first for John Bandy of California, Md. On an August morning, rounding a corner, the competitive cyclist blew a tire on an isolated stretch of road on the grounds of the Naval Air Station-Patuxent River. He fell hard, landing on his left hip and going into shock. 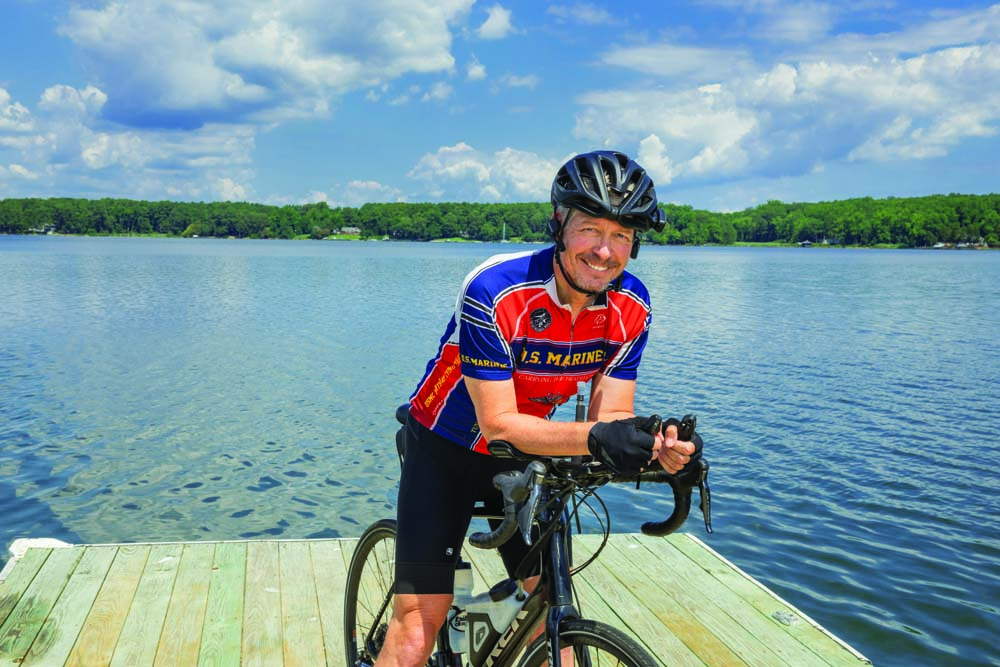 Luckily, two truckers soon drove by and found Bandy lying in the middle of the intersection. They tried to help untangle him from his bike, but his pain was too great. After a call to 911, Bandy was rushed to MedStar St. Mary’s Hospital in Leonardtown, Md., where physicians quickly realized he would benefit from the care of a Level I Trauma Center. He was airlifted to MedStar Washington Hospital Center, home of the region’s top trauma center.

Fortunately for him, Robert Golden, MD, chief of Orthopaedic Trauma, was working that night. He’s one of only a few specialists in the area who’s experienced with repairing this type of extensive damage. 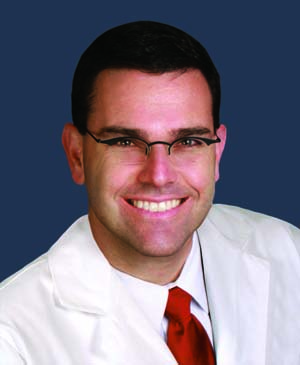 “John’s thigh bone had basically punched through the acetabulum—the deep, cup-shaped socket the femoral head fits into—and penetrated into his pelvis,” Dr. Golden explained. “Putting everything back together again is a difficult and complex procedure, complicated by the presence of some very big, important vessels and major nerves in the area.”

Bandy’s first step to recovery involved several days of traction, where weights were attached to a pin inserted through his femur. The apparatus held his hip in the proper position, helping to relieve pressure on the broken parts while preserving the limb’s length. The extra time also gave his body the chance to settle down after the trauma—and Dr. Golden and his team the chance to assure their patient was stable enough to undergo surgery. As Dr. Golden anticipated, the operation was tricky.

“I first made a C-section-like incision on his lower abdomen, so we could work around inside his pelvis,” Dr. Golden explains. “Then we made another incision more towards his hip and worked towards the more central incision, basically meeting in the middle.” 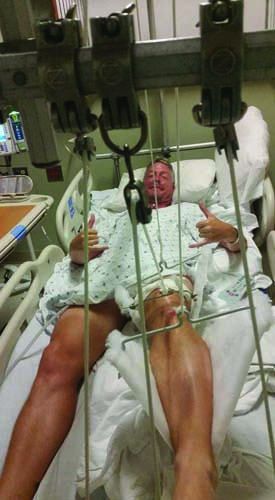 Dr. Golden then put the bones back into place and inserted a metal plate to serve as scaffolding for the broken bones, which was anchored in place with screws. Four days later, Bandy was transferred to MedStar National Rehabilitation Network for intensive in-patient physical therapy, followed by three months of out-patient rehab.

“My last day of PT was December 30, so I ended the year on a high note,” says Bandy. “It was also the end of a series of ‘firsts’ for me: my first bike accident in over 80,000 miles ridden, my first broken bone, and my first surgery.”

Another milestone occurred when Bandy took his first outside bike ride the following year, on May 25—almost seven months to the day after his accident—logging 38 miles. Since then, he’s been able to resume all of his previous activities, competing in the Semper5K, triathlons, and even participating as part of a two-man team in the cross-country Transamerica Bike Race.

The latest accomplishment for the now-56-year-old? Competing in a virtual race across the west, riding 950 miles in less than six days this June, and placing first in his age group.

“I still get some discomfort, and have to be careful,” he admits. “But I wouldn’t be able to do any of this without Dr. Golden and the nerve-sparing approach he used. He’s first-rate!”

Editor’s Note: Less than a year after John Bandy’s operation, Dr. Golden would perform a similar procedure on Rep. Steve Scalise after he was shot through the hip. Dr. Golden and the MedStar Washington Hospital Center team were later honored at a White House ceremony for their expertise and excellence in saving the Congressman’s life and limb.

“John’s thigh bone had basically punched through the acetabulum—the deep, cup-shaped socket the femoral head fits into—and penetrated into his pelvis. Putting everything back together again is a difficult and complex procedure, complicated by the presence of some very big, important vessels and major nerves in the area.”