Honoring a Caring Spirit
Use My Current Location 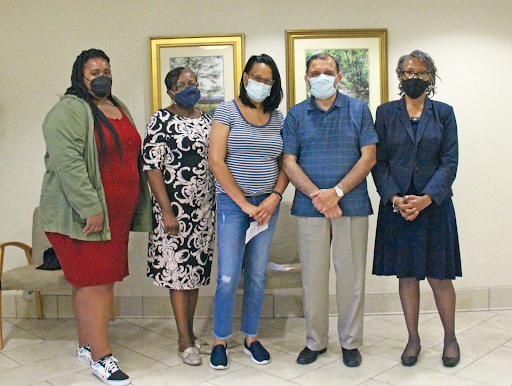 If you were to ask Diane Stewart about her mother, she would immediately reply with two words: humble and caring. “She was everyone’s savior,” Diane said. When her mother, Mary Agnes Stewart, passed away from cancer in July 2021, Diane and her sisters, Mary Helen Stewart and Catherine Stewart knew exactly what they had to do to honor their mother’s memory: express gratitude.

A life-long resident of Leonardtown, Mary Agnes retired from St. Mary’s Nursing Center, and post-retirement continued to care for local families as an in-home geriatric aide. When she became ill with cancer in 2015, she turned to the MedStar Georgetown Cancer Institute at MedStar St. Mary’s Hospital and Amir Khan, MD. “Everything Dr. Khan told mom to do, she did,” Diane said. “They gave her 6 months to live, and she lived 6 and a half years!”

“All that she could say was, ‘As long as my boy comes home, I will be OK,’” said Diane. “DeAndre came home in May and Mom died in July. It was like she was ready as long as he came home, she was good.”

Throughout her struggle with cancer, Mary Agnes remained under the care of Dr. Khan. During her last month of life, Mary Agnes also received in-home hospice care through Hospice of St. Mary’s.

“Hospice was wonderful,” said Diane. “They walked us through everything, and her nurse was phenomenal. She was so thankful for us being there with her the entire time.”

After Mary Agnes passed, the family wanted to express their gratitude to those who had provided her mother with such incredible care. They made philanthropic investments to the MedStar Georgetown Cancer Institute and Hospice of St. Mary’s. Several family friends also made philanthropic gifts in Mary Agnes’ name.