In honor of the late Alexander Dromerick, MD
Use My Current Location

In Honor of the Late Alexander Dromerick, MD 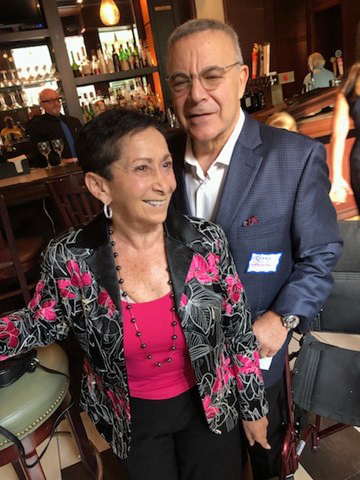 In 2011, Linda Greenberg had a serious stroke. She was airlifted to MedStar Washington Hospital Center, where she spent two weeks, followed by six weeks at the nearby MedStar National Rehabilitation Hospital.

Upon her discharge, Linda had to use a wheelchair and continued rehabilitation as an outpatient with the support of her husband, Lenny.

The couple also made an appointment to see a neurologist not affiliated with MedStar Health, and that appointment did not go as expected. “After briefly reviewing her medical records, the doctor told me I would never walk again,” Linda says. “The doctor barely looked up from her desk. We didn’t go back.”

Around the same time, Lenny and Linda were invited to their first MedStar NRH Gala. They were seated at a table that included Alexander Dromerick, MD, a noted professor of rehabilitation medicine and neurology and vice president of research at MedStar Health Physical Therapy. He also co-founded the Center for Brain Plasticity and Recovery, a joint enterprise of Georgetown University and MedStar NRH.

“When we shared the other doctor’s prognosis with Dr. Dromerick, he was quite surprised and immediately decided to take Linda on as a patient,” Lenny says. “From that point on, he was her doctor, even though he rarely saw patients due to his focus on research. Under his care, she made remarkable progress and is now walking.”

Dr. Dromerick worked with Linda as an outpatient until he stopped practicing due to the terminal illness that took his life in August of 2021.

“I am so grateful for the care I received from Dr. Dromerick and his team. It far exceeded our expectations, and the culture is amazing,” Linda adds.

Today, Linda still goes to physical therapy twice a week and is doing well. Lenny has been a patient at MedStar NRH, too, due to back issues. He now serves on the Board of Directors at the hospital.

In gratitude for the care they have received over the years, they have made several philanthropic investments supporting the Greenberg Motor Restoration Laboratory, the Adding Life to Years° campaign, and Fund a Fellow program. Now, to further honor the legacy of Dr. Dromerick, they are making a philanthropic gift to support the creation of an endowment that will fund future research.

“Dr. Dromerick became Linda’s angel,” Lenny says. “We are so grateful for the care that he and the rest of the team at the hospital provided.”