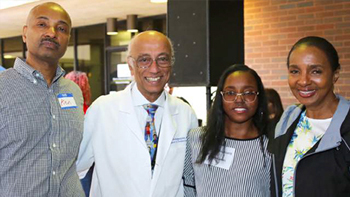 Thanks to Neonatal Intensive Care, a Fragile Infant Grows to a Fearless Adult By Jennifer Davis

Kenya Lewis weighed just 1 pound, 9 ounces when she was born 15 1/2 weeks early in 1996, struggling with every breath. Doctors at the Washington, D.C., hospital where she was delivered put her on a conventional ventilator, but that damaged her extremely immature lungs. After 2 1/2 weeks, her prognosis looked grim.

“The doctors and nurses had lost all hope for my survival and asked my parents if a priest could be called to give last rites,” Kenya explains. “My parents said no.”

Instead, Ken and Rosemary Lewis asked for their daughter to be transported to MedStar Georgetown University Hospital where she was admitted to the neonatal intensive care unit (NICU) and treated with an advanced piece of lifesaving equipment called a high frequency jet ventilator. It was set to breathe 400 breaths per minute and helped heal the tears in her lungs. Over the next 105 days, Kenya stabilized and grew. She weighed over four pounds when she was discharged. She still required oxygen and a variety of therapies, but she was on the road to recovery. In time, she was breathing on her own and flourishing. “She was one of the most difficult cases I’ve seen come through our NICU, and she has done so well, in spite of the challenges and problems she had at birth,” says Siva Subramanian, MD, MedStar Georgetown’s division chief of Neonatology.

Just 4'9" for most of her youth, Kenya took part in a variety of sports including swimming and basketball. She learned to play five instruments, discovered a passion for writing, and recently graduated from college. Now 22 years old and 5'2" tall, she shared her life story at a reunion of MedStar Georgetown NICU patients, a yearly event that brings back 600 to 800 families.

“I remind myself every day how far I have come—from being a tiny baby who was very sick to becoming a strong woman who’s fearless,” Kenya says. “I live out each day as a walking, breathing miracle.”

“To see the graduates come back and to see how well they have done, it is the most fulfilling feeling for the nurses, doctors, and other staff,” says Dr. Siva, who’s taken care of about 20,000 families in his more than 40-year career. He says it’s important that parents know their children can bounce back after high-risk and difficult starts in life when they have access to MedStar Georgetown’s quality medical care. MedStar Georgetown offers a wide array of services and expertise, including fetal medicine experts, advanced neonatal care, and top specialists—including one of the best pediatric transplant institutes in the country.

“This ‘continuum of care’—from before pregnancy, through delivery and neonatal care, and beyond discharge in the outpatient area—is what gives the best outcomes,” Dr. Siva says.

Kenya says there’s no question that the care she received as a baby set her up for success. “I know my life could have been very different,” she says. “But thanks to the care of wonderful doctors and nurses, as well as my parents and family, I am a warrior in life because I believed in myself and other people believed in me.”