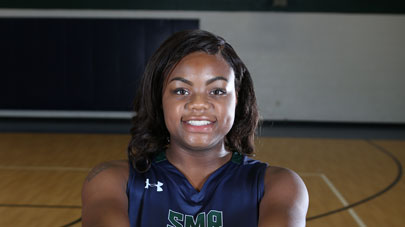 Just 30 seconds into her first scrimmage following a summer knee injury, the varsity basketball player took a shove from an opponent. Then a junior at The King’s Christian Academy in Callaway, Tanasia had been “feeling good, dribbling, warming up” before she felt the burst of pain and fell during a November 2016 game.

“I went to get back up, as I’d done many times before — but I couldn’t get back up,” she said.

Her parents, Tony and Denise, are their daughter’s greatest supporters, along with her brother, Tylik, who looks up to his big sister; her father is also a coach. After months of physical therapy and hard work to get back in shape following the knee injury, the Great Mills family was in disbelief that Tanasia could be seriously hurt again.

“Why is this happening to me?” Tanasia remembers asking her father.

“As a coach, I’ve always tried to have the answers for her,” said Tony, who witnessed his daughter’s injury from the bench. “But as her father, I didn’t have an answer to that. It made me feel vulnerable. She was in tears; I was almost in tears. After all her hard work, thinking about colleges — her mother and I, we just wondered, what is this going to do to her future?”

The varsity captain actually stayed to watch the game until the third quarter, when the pain became overwhelming. Tanasia was brought to the Emergency Department of MedStar St. Mary’s Hospital, where her knee was placed in a brace. She was able to get around on crutches as the family waited for the results of an MRI to reveal the extent of her injury.

Given the telltale “pop” Tanasia had felt, this was not unexpected. Still, she recalled, “When Dr. Atiemo told me I tore my ACL, I just got quiet.”

Then, as with other challenges the 17-year-old has faced, she and her parents got down to work.

Tanasia’s surgery took place on a Friday in December 2016. By that Monday, she was back to working hard in physical therapy — a display of the dedication Tanasia has always exhibited starting when she first asked to take up basketball in fifth grade.

Denise accompanied Tanasia to therapy sessions, recording video of her workouts so they could be carefully replicated at home. The goal was always to make sure Tanasia could get back to safely doing what she loved.

“As soon as she could walk, we were back to playing basketball,” said Tony. “Whatever Dr. Atiemo told us Tanasia was ready to do, we were doing it.”

Tanasia focused on strength and conditioning as well as agility training, getting back on a treadmill at home between physical therapy sessions. She continued to serve as captain of the varsity team her junior year, receiving the “most inspirational” award at the end-of-year banquet.

Following her longtime mentor, Coach Toyja Somerville, Tanasia began her senior year at St. Mary’s Ryken High School in Leonardtown. She looks forward to an active basketball season after a tumultuous start to 2017.

Off the court, Tanasia is a debutante in the Nu Zeta Omega Chapter of Alpha Kappa Alpha Sorority, Inc., volunteering more than 200 hours of community service this year. She was nominated for “Tomorrow’s Woman” in 2017 by the St. Mary’s County Commission for Women, and has earned many accolades as a most valuable player and beyond. Her future plans include studying sports management in college before going on to play professional basketball overseas.

The Miles family is grateful for the community support they received after Tanasia’s injury, as well as Dr. Atiemo’s calming presence as he helped guide the student athlete back to health.

“Dr. Atiemo was very reassuring and really took the time to explain the whole surgery to us,” Tony said. “If we had questions, we called the office, and he was very responsive. He talked about other players who have experienced this and came back [from it], saying, ‘Look at them now.’”

A year after her ACL tear, the Ryken senior now says she’s “feeling great and 100 percent ready to go.”

Visit MedStarStMarys.org/SportsMed to learn more about our specialists and common sports injuries.