If you were to imagine your blood vessels as a complex series of highways meant to transport oxygen and nutrients throughout the body, an arteriovenous malformation (AVM) is what would happen if those highways were to suddenly become tangled and wrapped together. This is a rare condition that creates abnormal connections between the arteries and veins and can lead to a widening of the vessels, ultimately forming aneurysms (balloon-like bulges that can burst and cause internal bleeding into the brain).

Most AVMs are present at birth, though they aren’t usually identified until later in life. They can occur anywhere in the body but are most common in the spinal cord or brain. Over time, they become more and more dangerous. The cause is unknown, though it is thought that they may be created by a rupture or clotting of a blood vessel during development, while still in the womb.

These symptoms typically appear during an AVM event, such as when it has already started to bleed. This can happen at any age, though two-thirds of these events occur before the age of 40.

While they can remain undetected for quite some time, AVMs do pose a serious risk. Brain hemorrhaging occurs in about four out of every 100 people with arteriovenous malformation annually. Each hemorrhaging event presents a 15 to 20 percent risk of death or stroke. Other risks include:

Many arteriovenous malformations are first detected via MRI. If an AVM is suspected without an MRI, your doctor may listen for a rhythmic, whooshing sound that is distinctive to the rapid blood flow surrounding an AVM. In both cases, a cerebral angiography must be performed in order to confirm diagnosis (use of X-rays and contrast material to produce pictures of blood vessels in your brain).

Given the risks involved, your doctor will almost always recommend some form of treatment once an AVM is discovered. Those options include: 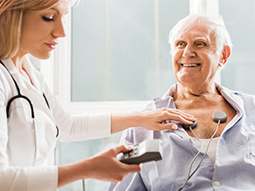 Getting the care you need starts with seeing one of our neurovascular specialists.