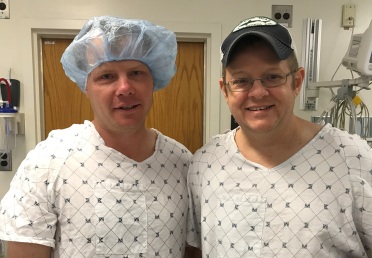 (Washington, D.C.,) - Kai Johns, 45, of Ashburn Virginia and his wife Heather Sheeley-Johns sat in a hospital emergency room back in November 2016 getting unexpected news. The stubborn “flu-like” symptoms Johns had been experiencing were the pre-cursor to the discovery that his kidneys were functioning at just six percent.

Johns was in kidney failure and needed a transplant. Fast.

With four generations of polycystic kidney disease before him, Johns would be the first in his family to need actually require a new kidney.

While Johns immediately started dialysis treatments three times a week, Sheeley-Johns took to Facebook to inform their friends of her husband’s dire condition and to ask if anyone would be willing to donate a kidney.

“We were paratroopers in the Army together and that brotherhood runs deep,” says Sgt. First Class Rob Harmon, 42, a telecommunications operations chief at the 3rd Infantry Division Sustainment Brigade at Fort Stewart, Georgia. Harmon did a tour in Iraq in 2002. “I’m willing and able and it’s no different than combat. He’d do it for me.”

Harmon and Johns met in the U.S. Army 22 years ago when they were stationed at Fort Bragg, North Carolina. They worked in competing platoons “jumping out of airplanes” as part of the Army’s signal telecommunications operations. Former Active and Former Reservist Johns left the Army in 2014. He has worked as an engineer for Sprint for the past 19 years.

The two had kept in touch on Facebook but hadn’t seen each other in 16 years.

“Rob is completely selfless,” says Johns. “It’s a huge honor to have him do this for me; to even consider donating a kidney to me. He has a wife and two children. This is a huge thing.”

Within weeks the testing was complete and Harmon was a match.

Harmon’s kidney was then carried to an operating room next door, where Johns was already prepped and ready to receive it.

The following day, Harmon’s kidney was working well in its new home.

“Both donor and recipient are doing extremely well,” says Dr. Verbesey. “In cases of living donation, donor safety is of utmost importance. Before someone can become a living donor we give them an extensive and thorough workup. Mr. Johns was so lucky to receive such a healthy kidney from his very selfless Army buddy.”

“Something told me before I was even tested that I was going to be a match for Kai,” says Harmon. “I just knew.”

“I would say, don’t be afraid to ask,” says Johns. “In my case my wife took to Facebook and did it for me. But I knew it was my only option. My situation is proof that there’s still a lot of good in this world.”