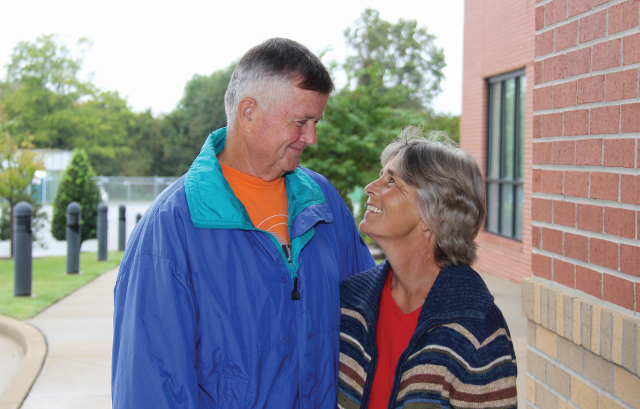 ‘It Came On With No Warning’

Gloria and Francis Bean were walking on July 4 — a typical sticky summer day, like many in Southern Maryland — when, without warning, Francis went into cardiac arrest.

They’d just completed a walk around Francis’ brother’s farm: a pleasant routine for the Valley Lee couple. Francis typically joins his wife for an hour before Gloria completes another 30 minutes on her own.

The two stood chatting on Independence Day when, as Gloria recalls, Francis suddenly collapsed, grasping at his wife’s shirt as he fell. He was not breathing.

“There were no warning signs,” Francis says. “You know how, with heart attacks or cardiac events, there are symptoms or warnings? There were none.”

Gloria has spent 36 years as a registered nurse at MedStar St. Mary’s Hospital, but this patient in sudden distress was her husband. They were just a five-minute walk from their own home, but it might as well have been miles. “We didn’t take our cell phones,” she says.

Driven by adrenaline, Gloria began cardiopulmonary resuscitation (CPR): the technique of administering chest compressions and giving breaths to assist a person who has stopped breathing or is experiencing a cardiac event. CPR restores oxygenated blood flow to the vital organs by pumping blood through the body, and/or giving breaths to oxygenate the blood being pumped.

“I was probably out there for 15 minutes,” Gloria says, “but then I really thought I needed to get help.”

She sprinted to find her brother-in-law and call 911, then returned to continue CPR. It took an additional 10 minutes of mouth-to-mouth before first responders could arrive.

“You’ve never been so happy to see anyone in your life,” Gloria says.

The Cardiac Catheterization Lab at the MedStar Heart & Vascular Institute determined Francis had a 100 percent blockage in one artery. Surgery was required to clear it and place a stent to keep the artery open. Francis was able to be discharged after just two days with a LifeVest — a wearable defibrillator — providing protection and peace of mind while he recovered at home.

Three months later, Francis smiles at his wife of 35 years. The pair has four grown children and three grandchildren. How grateful they are that Gloria was by Francis’ side that day.

“It’s so important that CPR was started immediately. Your chances of recovery drop with every minute until help arrives,” he says.

Francis started a supervised exercise program at the Grace Anne Dorney Pulmonary & Cardiac Rehabilitation Center at MedStar St. Mary’s, where his vital signs are monitored during low-impact routines. The intensity of his workouts has been gradually increased to safely return him to an active lifestyle.

The couple advocates strongly that everyone take a CPR course to be able to assist others in a crisis. At least 10 of the Beans’ family members have become certified since July.

Today, the Beans are back to walking again: an hour around the farm and home again.

“But we take a cell phone now,” Gloria smiles.

To learn more about cardiac and pulmonary rehabilitation, visit MedStarStMarys.org/GraceAnneDorney.

For CPR class availability and other opportunities at MedStar St. Mary’s, go to MedStarStMarys.org/Calendar.