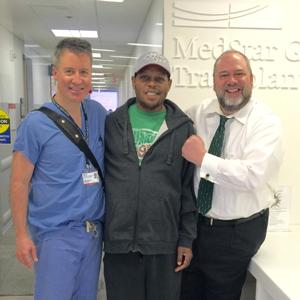 (Washington, D.C.,) – Jeffrey Edwards of Washington, D.C., can hardly believe that his 17 year battle with diabetes is over. His debilitating three-times-a-week dialysis sessions are finished.

“I’m no longer doing finger sticks to check my blood sugar, I can eat what I want, when I want and I feel great. It’s almost as if the diabetes never existed,” said Edwards, age 53.

Edwards, a letter carrier for the U.S. Postal Service of 31 years, is one of an increasing number of patients at the MedStar Georgetown Transplant Institute to receive a life-changing kidney/pancreas transplant as a treatment for severe diabetes.

“Because the regulation of insulin is performed by the pancreas, transplanting the pancreas in someone with severe diabetes cures them of their disease,” said Peter Abrams, M.D., a kidney and pancreas transplant surgeon at the MGTI.  “When we transplant the kidney at the same time, then the patient is no longer ruled by dialysis. And the new pancreas protects the new kidney from further damage due to the diabetes.  We call that a kidney/pancreas transplant. Mr. Edwards is doing great. He has no diabetes. He functions as a normal non-diabetic human being now.”

The pancreas is a gland about five to six inches long that sits behind the stomach and extends horizontally between the spleen and the duodenum. Pancreatic enzymes aid with digestion. It also produces insulin for the essential regulation of the use of blood sugar throughout the body. Diabetes occurs when the pancreas fails to correctly produce insulin.

Jeffrey Edwards had suffered through the many ravages of diabetes. A two week diabetic coma in 1999 almost ended his life. Congestive heart failure due to his diabetes necessitated heart surgery. Dialysis frequently resulted in serious complications.

“My life was so horrible knowing I had to go through dialysis to survive. Insulin wasn’t controlling my diabetes. I never knew what complication would happen next.”

“The most common candidate for a kidney pancreas transplant is a life-long type 1 diabetic whose disease is not well controlled with medication,” said Abrams.  “We can also cure diabetes in carefully selected type 2 diabetics.”

Edwards was listed for a kidney/pancreas transplant early in 2016 and was transplanted just three weeks later on February 11.

“I consider that my new birth date,” said Edwards. “This transplant has been such a blessing, such a game changer for me that I hope will add decades to my life. I cannot thank enough the generous person and his or her family who made this transplant possible for me. I am forever grateful for their selfless and life-saving act of kindness. Organ donors are true heroes. ”

“The other benefit of a kidney/pancreas transplant is that the time on the waiting list is usually around three months as opposed to five or six years for just a kidney,” said Abrams. “The waitlist is shorter because there are many fewer patients who are considered acceptable risk candidates for simultaneous kidney/pancreas transplant than kidney transplant alone. It’s a much bigger operation with more risk associated with it.”

According to the Organ Procurement and Transplantation Network (OPTN) 719 people in the United States received a kidney/pancreas transplant in 2015; another 228 received a pancreas alone.

“If someone with severe diabetes has a living kidney donor, we can do that transplant first, let them recover, then list them for a pancreas,” said Abrams.

Marhea Ruzanic, 46, an elementary school teacher from northern Virginia is one such case.  Her diabetes diagnosis struck from “out of the blue” when she was 23 and had been difficult for her to control with medication.

“I had been fit and healthy all my life, then suddenly I was what you call a ‘brittle diabetic,’ ” said Ruzanic. “Diabetes led to the amputation of one of my big toes, a heal fracture, several laser eye surgeries to address retinopathy, cataracts in both eyes, severe diabetic wounds, loss of feeling in my hands and feet, neuropathy of my bowels so food would go right through me, and that led to unhealthy weight loss of around 20 pounds. ”

Ruzanic started dialysis in 2012. Three days a week. Five hours a day.  “I was so dizzy and sick from it, all I could do was drag myself to work, do my best to recover from the dialysis to get to my next treatment and then do it all again.  It was horrible.”

Then in 2013 Ruzanic received a kidney from a friend, a living donor.

“But I knew that I was still a diabetic and that if I didn’t get a new pancreas, this new kidney would be in trouble.”

“When I test my blood sugars and they’re normal, I want to fall out of my chair,” said Ruzanic. “I still test myself because after 23 years as a diabetic I almost can’t believe it.”

Ruzanic went back to her teaching job full time after ten weeks.  She is now back at the gym.

“I have so much more energy now. I have no symptoms and everyone has commented on how alive I look. I’ve put on weight so I am healthier and stronger now. It’s just been amazing.”

“This is the wonderful thing about this kind of transplant and it’s so satisfying to me as a surgeon to see people once so debilitated, now completely transformed.  I think we need to do a better job as a medical community to get the word out about kidney/pancreas transplant. Lessons are well learned and it’s time to spread the word about the possibilities of a pancreas transplant and get to patients sooner.”

“My other physicians were discouraging me from having a pancreas transplant,” said Ruzanic. They warned me that it was too risky and that the recovery was terrible. But I really wanted to have a shot at a better life and I didn’t find the recovery to be all that bad. After getting my new pancreas, I went to my diabetes doctor and said, ‘here ya go, you can take all my left over insulin. I’m donating it. You can give it to another patient who needs it.’ “

Jeffrey Edwards is headed on a Caribbean cruise in July. Marhea Ruzanic spreads the word about kidney/pancreas transplant as an ambassador with the Washington Regional Transplant Community (WRTC).  Both are living lives they thought would be derailed by diabetes.

“This is experience has given me time and opportunities I wouldn’t have had, “said Ruzanic.

“I think that if the chance presents itself for someone like me to live a better and longer life diabetes and dialysis free, they should take that shot,” Edwards said.