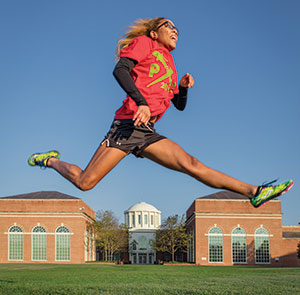 Conventional ACL surgery requires the orthopaedic surgeon to drill tunnels through the bones on either side of the knee joint and replace the torn ACL with a tendon graft, usually from the patient’s own body. With the new, minimally invasive approach, the ACL is repaired with an internal brace. An orthopaedic surgeon passes a high tensile-strength, braided suture through the repaired ligament in the knee, to provide additional support while the ligament is healing. The suture functions internally like a knee brace.

“It is minimal trauma to the knee,” said Wiemi Douoguih, MD, an orthopaedic surgeon with MedStar Orthopaedic Institute at MedStar Washington Hospital Center. “Since it’s located inside the knee joint, it’s more effective than an external knee brace and the innovative suture technique helps speed up recovery time."

Two weeks after her surgery, Kaniya started walking. Nearly five months later, Kaniya resumed running and played soccer, too. She hopes to compete on the track team at the University of Maryland Eastern Shore where she’s a freshman.

An estimated 200,000 ACL injuries occur annually. The rate of injury is higher in people who play high-risk sports, such as basketball, football, skiing and soccer.

Published studies in the American Journal of Sports Medicine finds only about 43 percent of high school and college football players who have undergone conventional ACL surgery are able to return to play at their pre-injury level. And data collected for the past 20 years shows that as many as 61 percent of patients develop symptomatic arthritis, and up to 36 percent of patients will have recurrent ACL tears.

“Prior to this, the results were less than perfect and we’ve been searching for a solution that would pose the least amount of trauma to patients and minimize long-term problems,” added Dr. Douoguih.

Learn more about the cutting-edge procedure and Kaniya’s return to a sport she loves in the video below.

MedStar Washington Hospital Center is a 926-bed, major teaching and research hospital. It is the largest private, not-for-profit hospital in the nation’s capital, among the 100 largest hospitals in the nation and a major referral center for treating the most complex cases. U.S.News & World Report consistently ranks the hospital’s cardiology and heart surgery program as one of the nation’s best. It also is a respected top facility in the areas of cancer, diabetes & endocrinology, Ear, Nose & Throat, gastroenterology & GI surgery, geriatrics, gynecology, nephrology, pulmonology and urology. It operates MedSTAR, a nationally-verified level I trauma center with a state-of-the-art fleet of helicopters and ambulances, and also operates the region’s only adult Burn Center.