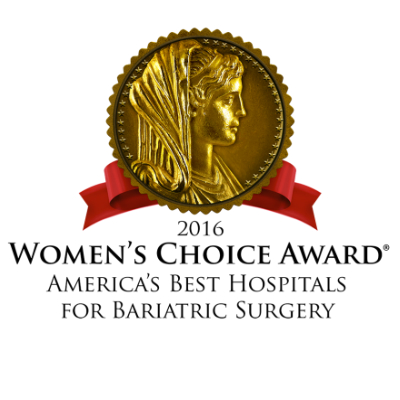 BALTIMORE—(January 6, 2016)—MedStar Franklin Square Medical Center has received the 2016 Women’s Choice Award® for being one of America’s Best Hospitals for Bariatric Surgery. The designation is the only award that uses evidence based data to identify the country’s best healthcare institutions based on robust criteria that consider female patient satisfaction, clinical excellence, and what women say they want from a hospital.

MedStar Franklin Square Medical Center is among 300 winners, which have met the high standards of The American College of Surgeons (ACS) and the American Society for Metabolic and Bariatric Surgery (ASMBS), thereby supporting a woman’s decision when choosing the best for her healthcare needs.

Hospitals that have earned this award have met the highest standards of The American College of Surgeons and the American Society for Metabolic and Bariatric Surgery through the Metabolic and Bariatric Surgery Accreditation and Quality Improvement Program (MBASAQIP). Awarded hospitals also ranked above the national average for patient recommendations on the Hospital Consumer Assessment of Healthcare Providers and Systems (HCAHPS) surveys, as indicated by the data reported by the Center for Medicare and Medicaid Services (CMS)

According to a 2015 study, 80% of patients who undergo bariatric surgery are female, despite equal rates of obesity among American men and women. ASMBS data shows that the most common bariatric surgery procedures are gastric bypass, sleeve gastrectomy and adjustable gastric band.

“Women tend to be risk averse, so we’re simplifying her choices by verifying those hospitals providing outstanding patient care and performance, allowing her to choose with confidence,” says Delia Passi, CEO and Founder of the Women’s Choice Award.

MedStar Franklin Square Medical Center is a not-for-profit 378-bed community teaching hospital located in the White Marsh section of eastern Baltimore County, Maryland. MedStar Franklin Square provides many medical and healthcare services, including a broad range of healthcare specialties, advanced technologies and treatments not traditionally found at community hospitals. The hospital is ranked third in admissions among all Maryland hospitals and is first in Emergency Department visits with more than 108,000 visits annually. MedStar Franklin Square is accredited by the Joint Commission and certified as a Primary Stroke Center and has earned some of the nation’s most prestigious quality awards including Magnet Designation for excellence in nursing, the Excellence Award for Quality Improvement from the Delmarva Foundation and inclusion in the U.S. News & World Report Best Hospital specialty ranking for four consecutive years. With more than 3,300 employees, MedStar Franklin Square is one of the largest employers in Baltimore County. Visit medstarfranklinsquare.org for more information.