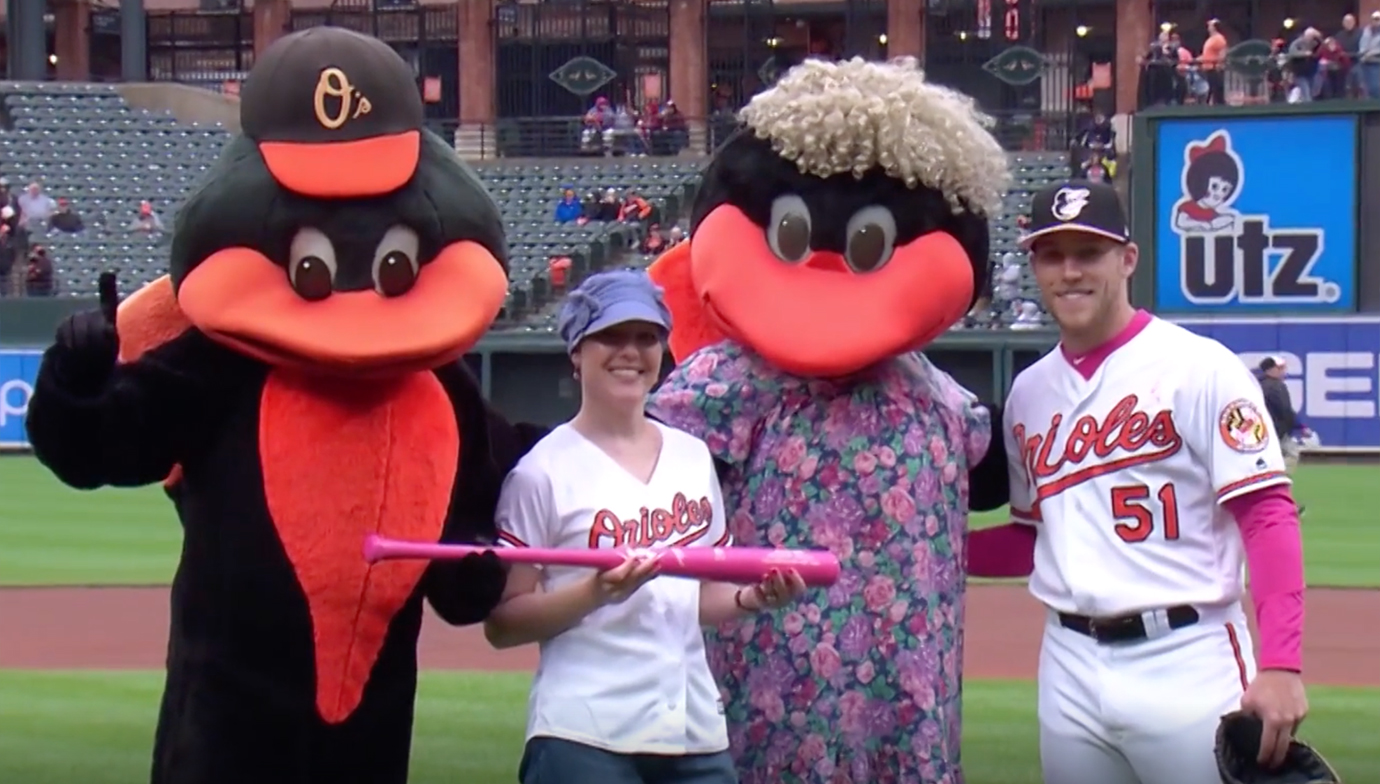 BALTIMORE, MD – In front of the team’s home crowd on Mother’s Day, the Baltimore Orioles honored two Maryland women who stepped up to the plate against breast cancer. The O’s named Harford County resident Ann Laughton a Birdland Community Hero for her work overseeing MedStar Health’s Survivors Offering Support program, a volunteer group offering help to new breast cancer patients. Melanie Vohs of Bel Air was chosen to serve as the team’s Honorary Bat Girl for 2019 on her first Mother’s Day as a mother herself. She gave birth to a beautiful baby girl earlier this year in the middle of her fight against the disease.

Last year, Laughton took over the Survivors Offering Support group at MedStar Franklin Square Medical Center where she worked as a nurse for 24 years before retiring. The goal of SOS is to offer help to every recently diagnosed breast cancer patient. Laughton is now cancer free after receiving her own diagnosis seven years ago.

“Younger cancer patients have unique issues to deal with, such as young children, so it helps to connect with someone whose journey and experience is similar,” Laughton said. “We have about 25 mentors serving as support persons for people who have had a similar diagnosis. All the mentors volunteer.”

Laughton also helped launch the Transition to Wellness support workshop and dinner at MedStar Health’s Bel Air campus in November 2018. There, patients within six months of completing treatment come together to discuss important topics like resuming normal activities, positive affirmation, the possibility of recurrence and more. As Birdland Community Hero, the Orioles provided Laughton with four game tickets, VIP parking, an award medal, and an in-game ceremony on the video board during the May 12th matchup. The Orioles Charitable Foundation will also make a $2,500 donation to Survivors Offering Support.

“It’s been a wonderful experience.  I am honored to be here and to have been nominated has just been absolutely amazing.  It’s wonderful to be here to celebrate,” Vohs said.

Vohs was diagnosed late last year after finding a lump in her chest while 22 weeks pregnant with her first child. Despite concerns about how cancer treatments would affect her baby, Vohs’ care team at MedStar Franklin Square Medical Center developed a plan to shrink her tumor without impacting the pregnancy. Her healthy daughter, Morgan Olivia, was born earlier this year without any complications. One day later, Vohs got the good news that her cancer had not spread elsewhere in her body. Doctors are now recommending mastectomy to remove the remaining part of the tumor. As part of the treatment process, Vohs was not allowed to nurse her newborn but she says other new moms in the community were there to offer support. They donated their own breast milk to feed baby Morgan.

“The support and encouragement I’ve had from other moms has been great,” Vohs said. “I didn’t know what to expect because she’s my first child, but she is keeping me focused on my treatments.”

On Mother’s Day, 2019 Honorary Bat Girls were recognized at Major League Baseball games across the country. In addition to free tickets, they also enjoyed a meet and greet with players, a commemorative jersey, a name engraved baseball bat, a handbag in addition to other memorabilia designed to raise breast cancer awareness.