The vests were custom fitted for each of the hospital’s four-legged security officers: Zeus and Raven, both two-year old German shepherds, and Max, a three-year old Dutch shepherd. 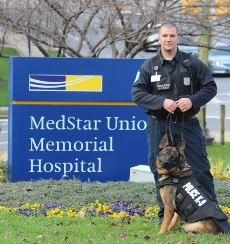 Through a national crowd-funding campaign sponsored by Groupon Grassroots, that ran from May 11-25, 2015, the “Good Pet Collection” raised over $39,000.00 from ten-dollar donations online. One-hundred percent of the funds were allocated to purchase body protective body armor at an exclusive $1050 each, for 37 law enforcement dogs.

“The vests are an investment in the safety and security of our dogs,” said MedStar Union Memorial Hospital’s Corporal Joel Schindler.  “These guys are our partners in law enforcement; they are trained and certified, and will be identifiable as police officers with the vests on. We don’t expect the vests to ever be tested, but there’s a peace of mind in being prepared.”

MedStar Union Memorial Hospital added a canine program to its 60-member security force in November 2013, as an increased crime prevention and explosive detection service. The dogs are certified under the American Working Dog Association, (AWDA).

“The presence of the canines definitely, without a doubt, plays a vital role in the overall welfare of our patients and hospital visitors,” said Corporal Schindler. “We have experienced that when a patient is upset, their attitude changes as soon as we bring the canines in.” 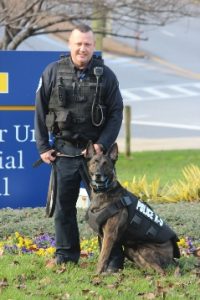 All vests will include an embroidered memoriam, “In Memory of K9 Kye, Oklahoma City Police Department.”  Kye was killed in the line of duty August 24, 2014, after being stabbed by a burglary suspect the German shepherd chased and subdued.

MedStar Union Memorial is a proud member of MedStar Health, a non-profit, regional health care system with 10 hospitals and more than 20 other health-related services in the Maryland and Washington, D.C., area.

ABOUT VESTED INTEREST IN K9S, INC.

Vested Interest in K9s, Inc. is a 501c (3) charity located in East Taunton, MA whose mission is to provide bullet and stab protective vests and other assistance to dogs of law enforcement and related agencies throughout the United States. Each vest costs $1050.00 and has a 5-year warranty. The nonprofit was established in 2009 to assist law enforcement agencies with this potentially lifesaving body armor for their four legged K9 Officers. Through private and corporate sponsorships, Vested Interest in K9s, Inc. provided over 1460 law enforcement dogs in 49 states with protective vests since 2009 at a cost of over $1.3 million dollars.

New K9 graduates, as well as K9's with expired vests, are eligible to participate. The program is open to law enforcement dogs who are U.S. employed, certified and at least 19 months of age.

Go to vik9s.org. for more information.