A trip to Golden Corral began like any other lunch for Adrian Knight, a trim, previously healthy, retired IRS worker, and father of two grown daughters who live in Capitol Heights. He headed into the restaurant but began to notice his left foot was dragging as he walked. He shrugged it off, thinking because it was rainy out, his foot was slipping.

As he headed to the buffet, he realized the numbness on his left side wasn’t going away and was, in fact, getting worse. He began to worry, thinking it could possibly be a stroke, remembering the stroke his mother suffered when he was a child. He left, calling his girlfriend to meet him at home. When she saw how weak he was, she insisted they visit a local urgent care facility. 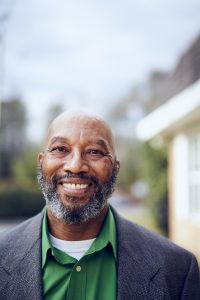 When Mr. Knight was seen there, they quickly realized he needed an Emergency Room, and transported him by ambulance to MedStar Southern Maryland Hospital Center (MSMHC). At the hospital, MSMHC Emergency Department associates took his vitals, determined he was experiencing a stroke, immediately put him on IV medication, and began running numerous tests.

“Everything went right for Mr. Knight because we were able to help him in a prompt fashion,” said MSMHC Neurologist Aabha Shah, MD. “The benchmark for best possible stroke recovery is to be administered thrombolytic therapy within sixty minutes, and he was. Because of this, he had the best possible outcome for a stroke patient and he’s now at home, able to return to normal activities.”

Dr. Shah stresses when stroke patients come to MSMHC, not only do they receive excellent care from the team here, but physicians also have access to on-call stroke specialists. This can come in the form of telemedicine, which provides virtual consultations, much like using FaceTime, with stroke specialists from MedStar Georgetown University Hospital and MedStar Washington Hospital Center. In addition, patients have an entire multidisciplinary stroke network here to help them, which includes neurologists, physical, occupational and speech therapists, and stroke-trained nurses.

“I learned if I had not gotten to the hospital when I did, if I had been even an hour later, I would not have recovered,” said Knight. “I’m now 100 percent restored and I’m following all recommendations, like watching my diet and using the patch to quit smoking. I feel better now than before the stroke and I’m reducing the stress-related causes.” During testing when he was an admitted patient, Mr. Knight was also found to have untreated high blood pressure and high cholesterol.

“What I’d tell people is, your health is so important and you need to monitor that,” said Knight. “I never thought I’d have high cholesterol, but I do, so I keep it in check. I take high blood pressure medication and I practice yoga and meditation. I tell everyone to listen to your body and remember that your health is so important. I’m learning to accept life on life’s terms. I keep my aggravation down and let problems roll off my back like water off a duck.” Mr. Knight credits the entire MedStar team for his recovery, but specifically his neurologist, Dr. Shah. “She was awesome,” said Knight. “She walked me through everything, step-by-step, keeping me in the loop about everything. It was so personal that I really felt comfortable with her. The whole staff was awesome, but she sat with me and took her time to make sure I understood. She genuinely showed her care and concern.”

To recognize stroke symptoms, learn the acronym BE FAST (right). Call 9-1-1 as soon as stroke symptoms start. Acting quickly is very important and means the difference between recovery and suffering debilitating consequences from a stroke, as stroke treatment must be administered within four and a half hours of the onset of symptoms.