Our story begins on a chilly night in late December 2016. Excited, soon-to-be parents, LaWan Sypert-Mujiheed, an accountant, and her doting husband, Dawud, arrived at our doors ready to welcome their daughter.

OB/GYN Dr. Michael Hotchkiss was ready for this moment, as well. “They’re a wonderful couple,” he said. “Dawud would come to every single visit with LaWan. We were following her carefully throughout her pregnancy, as it was a high-risk case, being IVF with advanced maternal age. At her last appointment, Dawud asked, ‘Doc, are we doing okay?’ I said, ’we’re doing just great.’”

Dr. Hotchkiss knew LaWan was on her way to the hospital that evening. The plan was for the OB/GYN on duty to begin induction of labor. Dr. Hotchkiss planned to see LaWan by morning when she was ready to deliver. Soon after arrival at our doors, though, LaWan began contracting on her own. This baby was ready to meet her parents. And the OB/GYN team was prepared.

But it quickly became frighteningly apparent that something was very wrong. LaWan, who was in active labor, let out a noise, a whoosh of air, and collapsed, passing out completely. The baby’s heartbeat slowed.

Nurses sprung into action, activating the hospital code for Rapid Response. The mother's condition continued to deteriorate. An anesthesiologist was paged. The baby needed to come out, now. The OB/GYN on duty performed an emergency c-section and baby Laila was delivered around 1:40 a.m. Both mother and baby needed immediate attention. Both were in grave danger.

Dr. Brook Gebeyehu, the anesthesiologist on duty, intubated and oxygenated LaWan. She was rushed into the Intensive Care Unit as the doctors worked in concert to try to save her life. LaWan was comatose and experiencing a blood clotting disorder that caused her to begin to bleed out of every orifice of her body.

Across town, the Chair of our hospital’s OB/GYN Department, Dr. Nahid Mazarei, received a phone call. It was 2:30 a.m.

“I’m so glad the nurses didn’t hesitate to call,” said Dr. Mazarei. “They called at 2:30 a.m. with no reservations and that accelerated what we were able to do. They’re empowered to go above and beyond. I tell every patient, you’ll get everything I have and that’s how the whole system operates. We work collaboratively and it’s seamless the way we work with one another and communicate with patients and their families.”

Dr. Mazarei thought carefully about what was being described to her. It sounded like a case of an amniotic embolism, which was a scary proposition. She knew these cases are around 80 percent fatal and that fatality comes so quickly these cases are typically only diagnosed during an autopsy after the mother passed away. She also remembered, with the remaining 20 percent who survive, the majority experience the tragedy of permanent brain damage. Dr. Mazarei sprung into action, jumping in her car and calling another of our hospital’s experts, Dr. Sara Parker.

Around 3 a.m. the piercing ring of her phone awoke Dr. Parker. She bolted out of bed, raced to her car and discussed the facts of the case en route. They concurred: it was an amniotic fluid embolism, wherein the amniotic fluid and fetal cells flood a mother’s body, disrupting every system, causing LaWan’s heart and lungs to collapse and her body to have a seizure. She was dying and they had to hurry. 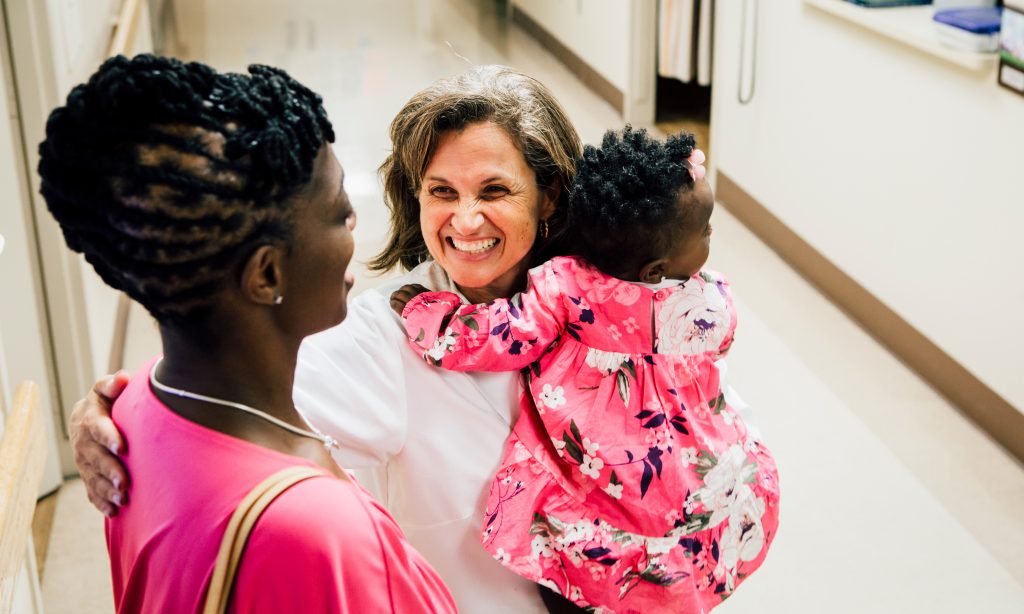 “I’m one of the luckiest OB/GYN Chairs around,” said Dr. Mazarei. “To have Dr. Parker, who is trained in both critical care and obstetrics, it’s rare across the nation. It takes us to a whole different level. What is great about this place is that with the MedStar network, you get layer after layer of support.”

In Labor & Delivery, baby Laila was struggling. After birth, she was experiencing a drastically fluctuating heart rate. Her lungs were also compromised. Then, baby Laila coded, her tiny body going into cardiac arrest, three times. She was intubated with an unstable heart rate and was readied to be flown to Children’s Hospital.

Dr. Parker arrived. She saw LaWan had lost way too much blood. She ran down to the blood bank, to the lone associate working this normally quiet shift before dawn. Dr. Parker counted units of blood herself, determined the amount of platelets LaWan needed and made the call that the Red Cross must bring extra units to save LaWan’s life. The Red Cross’s truck departed Baltimore for Clinton.

The skies outside turned from mist to rain. It would be unsafe for baby Laila to fly by helicopter to Children’s Hospital. It would take longer, but they must drive, with paramedics performing CPR for an hour on the road, not knowing how fortuitous it was that the weather prevented their flight. They did not know until later, when the x-ray came through after they were already on their way, but during the event of her birth, Baby Laila had developed a lung condition called bilateral pneumothorax. The pockets of air that were present in her walnut-sized lungs meant the pressure changes that would have occurred during a helicopter flight would have been fatal.

Laila arrived in dire condition, but alive, at Children’s Hospital. It was now after 10 a.m. To stabilize the baby, physicians there put her into a hypothermic state, where her delicate body was cooled down, slowing her metabolism and hopefully, they fervently wished, sparing her from brain damage.

Back at MedStar Southern Maryland Hospital Center, steroid treatments and units of blood had been administered to LaWan, and the medication began to help her blood coagulate again. After all the units of blood and platelets she received, it looked like there was a sliver of possibility she might live. She was in a coma, but was as stable as possible under the circumstances. Would she come out of her coma? Would she live long enough to meet her baby? If so, would she ever wake up and be able to hold her?

Exhausted, Dr. Parker and Dr. Mazarei could finally breathe again. For now, though they would stay at the hospital for countless hours ahead, as would the entire team, they could rest. And wait.

LaWan lay in her bed, barely responsive, for days. ICU nurses were losing hope for recovery because their patient just wasn’t responding. But Dominique Stuckey, Director of the Women and Newborn’s Center, would bring her fellow Labor & Delivery nurses in numerous times per day, believing LaWan could hear and understand them. Slowly, she began to respond to simple commands.

Baby Laila gained weight. Her daddy came to see her every day. Her doctors waited nervously for the results of her EEG tests measuring brain activity. To their delight, the tests came back with normal results. Laila was bright-eyed, and incredibly, she was perfect. After just over a week at Children’s Hospital, she was ready for discharge and was finally brought to the bedside of her mom.

From MedStar Southern Maryland Hospital Center, LaWan would transition to the MedStar National Rehabilitation Hospital (MNRH), thanks to the help Dr. Parker and hospital administration provided to secure transition to this top-tier facility.

It would take her months in rehab at the MNRH for LaWan to recover. There, she learned how to eat, swallow and speak again. She grew stronger by the week.

Miraculously, ten months have passed and LaWan and Laila are doing well. Laila is a happy baby who likes to make her voice heard. She has two teeth and is mere weeks from crawling.

“You are never prepared to hear your wife is dying and your baby is too,” he said. “But God had a plan. I thought of that every time I would drive to the hospital to see my baby. I knew she would pull through, just like her mother. They are strong women. And I think about Dr. Mazarei. I’ve never seen a woman as strong as my wife, but she is.”

As his anxiety has faded with time, the overwhelming feelings of love and gratitude remain with Dawud. He calls Laila the apple of his eye and a gift from God. He also continues to marvel at LaWan powering through her recovery. She still goes to therapy three times per week, but they are healthy, they are alive and they are a happy family.

For the doctors, nurses and all MedStar associates who played a part in this story, the experience has not left their minds, either. What remains with the team is an inspiring, touching memory of being a part of something that can truly be called a miracle.

“The whole team functioned extremely well,” said Dr. Hotchkiss. “Every time we’d say ‘you’ve got to do more!’ they did more. It was an amazing response and a great outcome.”

Visit MedStarSouthernMaryland.org/Family for more information about our Women and Newborns Center.