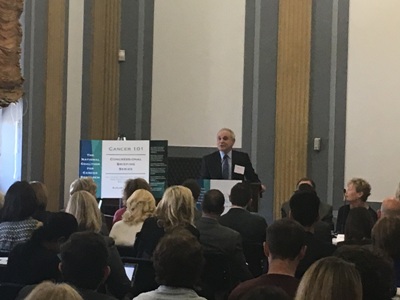 Michael B. Atkins, MD, explained the power of immunotherapy during a seminar for members of Congress and their staffs on Monday.

MedStar Georgetown’s Michael Atkins, MD, translated his vast knowledge of cancer immunology into a classroom-style lecture Monday for a standing-room only Congressional briefing.

Atkins and five other elite leaders in oncology research, advocacy and industry aimed to educate members of Congress and their staffs about various aspects of cancer during a seminar titled “The Cancer ‘Moonshot’ Initiative: New Frontiers in Cancer Exploration.”

The Moonshot Initiative added a new urgency to the "Cancer 101" briefing series, organized by the National Coalition for Cancer Research.

“With the right investments, we can make 10 years of progress over the next five years,” Atkins told the audience.

President Obama officially launched the Moonshot initiative at the 2016 State of the Union address in January, tapping Vice President Biden to lead the effort.

Atkins described immunotherapy as an approach that is producing “a fundamental shift in the way we treat and even think about cancer and is critical to making the Cancer Moonshot a reality.”

“No single treatment target in the history of oncology has produced such broad-spectrum activity,” and he added, “Immunotherapy has the potential to cut deaths from cancer in half, similar to what we have already seen in melanoma.”

Atkins told the audience about Stan Collender who had advanced Merkel cell cancer, a rare type of skin cancer that was previously untreatable.

“Stan is essentially cancer free after participation in an NCI-sponsored immunotherapy research protocol,” he said.

Atkins concluded his talk by outlining recommendations for accelerating research progress including focusing on basic research and clinical trials as well as enhancing government-pharma-academic relationships, bringing community oncologists into the fold and increasing immunotherapy education for scientists and clinicians.

MUCH TO BE DONE

“In my view, the goal is no longer to turn cancer into a chronic disease, but to make it a curable disease. With immunotherapy this vision is fast becoming a reality for many patients,” Atkins said.

“There is much to be done. For the patients and families struggling with cancer we cannot do this work fast enough.”