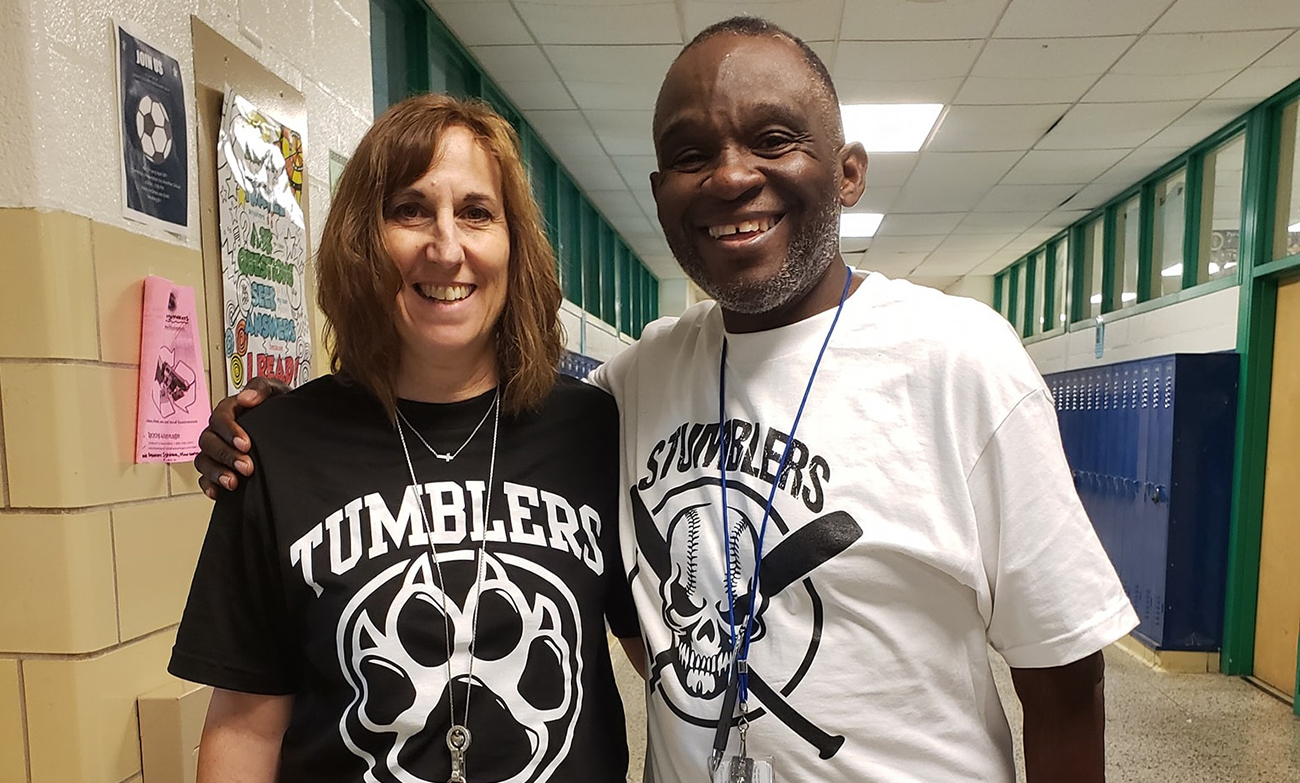 “I felt like the clock was ticking against me.”

Gary Simmons, of Glen Burnie, MD, was doing everything he could to maintain his healthy lifestyle while battling kidney failure caused by diabetes. He ate right, worked out three times a week, rode his bike over 30 miles every weekend, and just started a new job with the special education staff at Lindale Middle School in Linthicum, MD. Despite his best efforts, Simmons could tell that his condition was worsening late last year.

Simmons sought help from transplant specialists at MedStar Georgetown University Hospital, who immediately ordered dialysis treatment and listed him for a kidney transplant.

Simmons’ physicians explained that the only way to cut down his time on the waiting list was to find someone willing to give him one of his or her kidneys; a living donor.

“They talked about self-advocacy,” Simmons says. “I sent my story out to just about everyone that was in my e-mail contacts.”

That list included friends, family, and many of the people he had only recently contacted initially about his current position at Lindale Middle School. Simmons received a reply from his boss, Danelle Chapman, who hired him only a few months prior.

“She responded the next day saying, ‘Hey, I’m going to look into this to see if I can donate to you.’”

“I didn’t think it made any sense. She just gave me a job,” he says. “She really didn’t know me besides from school. I said, ‘Nobody’s really that kind.’ But it turns out she is.”

Choosing the Gift of Life

Chapman chairs the school’s special education department and, until Simmons’ e-mail, did not know the severity of her colleague’s illness. She says the decision to become his living donor was not a difficult one.

“First, I realized he was in his forties and raising two kids. I already knew about his work ethic and his community service. He’s just an all-around great guy,” Chapman says. “I felt like he had a lot to give, and it was important to extend the quality of his life so that he could be there for his kids and provide for them.”

She kept her word, undergoing tests and examinations at the MedStar Georgetown Transplant Institute (MGTI) to determine if she could donate to Gary.

“It’s a phenomenal program,” Chapman says. “Everyone was very kind throughout in explaining the procedure. They were extremely supportive.”

Unfortunately, the results of the tests showed that Chapman and Simmons were not a blood match, meaning that her kidney could not be donated directly. Fortunately, there are other options.“Paired kidney exchange (PKE) is just one of the tools we use to complete living donor transplants even if the donor and recipient are not biologically compatible,” says Jennifer Verbesey, MD, director of the Living Donor Transplant Program at MedStar Georgetown University Hospital. “Through the exchange, we can connect our pairs with others in the same position across the country and ultimately find matches. The goal is to build donation chains so that two, three, four or more people can end up getting a new kidney instead of just one person.”

After agreeing to take part in the paired kidney exchange, Chapman could finally deliver the big news.

“I think the look on his face was very surprised,” Chapman recalls through laughter.

“I didn’t know whether to scream, to cry, or to shout. I’ll be honest, I was in such shock that I was motionless,” says Simmons. “It was amazing. God gave me a job and put me in a place where people were really looking after me.”

Coordinators at MGTI were able to fit both patients into the paired kidney exchange network. A blood match recipient was found for Chapman’s kidney and, in return, Simmons would receive a compatible kidney back from another donor in the exchange.

“It’s pretty amazing when I think about the impact because it definitely effects so many more people than just Gary,” Chapman says.

“She started off with the intention of helping me but, at the end of the day, she ended up saving two lives,” said Simmons.

Both successful surgeries took place during the same week in late July. Gary had his new kidney transplanted by Dr. Verbesey just two days before his birthday on July 25th. It’s a gift he will never forget.

In an additional show of support and kindness, another teacher from Lindale Middle School, Terra Greene, is serving as Simmons’ caretaker throughout his recovery from transplant surgery. Gary plans on returning to work in October or November. Chapman says she’ll be ready for the start of the new school year in late-August, and she is excited to eventually tell students all about her summer vacation.

MedStar Georgetown Transplant Institute performs more living donor kidney transplants than any other healthcare institution in the Washington, D.C., metropolitan area. It is also recognized as a national leader in kidney exchange and the management of recipients and donors who are incompatible. Only a handful of transplant centers in the United States offer this option to their patients. For more information, visit: MedStarGeorgetown.org/LivingDonor