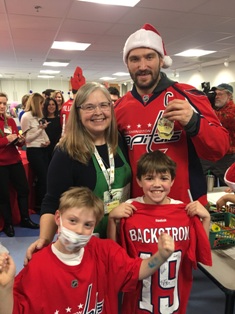 “It’s the best day on earth!” said Joe Miller, a 6-year-old battling a rare blood disorder, who says he is a huge fan of the Washington Capitals.

It was a sea of red in the Pediatric Hematology Oncology Clinic as Caps players visited with patients and their families. The Players autographed jerseys and hats and helped with various art projects. The young patients, parents and siblings were excited to see their favorite players take time off the ice for the visit.

The Capitals teamed up with Hope for Henry and its founder Laurie Strongin whose son was treated at MedStar Georgetown 14 years ago. Addressing the team she said, “My son Henry was a total Caps fan. You guys made so many people happy today. It’s so hard to be in the hospital during the holiday season.”

Many kids enjoyed playing with Play-Doh, including 4-year-old Brock Ludwigson who was diagnosed with a rare cancer when he was 12 months old. Defensemen #88, Nate Schmidt was helping him make planets with the Play-Doh. “We’re all having a great time. I haven’t played with Play-Doh in awhile. The kids have been through so much, yet they still are smiling and having a good time. It’s an enlightening experience for me,” said Schmidt.

Players handed out hats and caps through Ellie’s Hats and everyone enjoyed treats from Georgetown Cupcake. 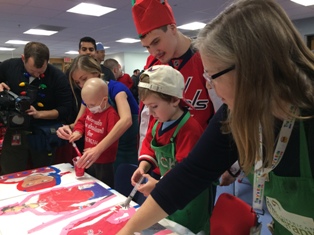 19-year-old Charlotte Hay, who was treated for leukemia at MedStar Georgetown, drew a portrait of T.J. Oshie. “I’m a hardcore Caps fan. Not just a little fan. They’re such nice players, such great guys.”