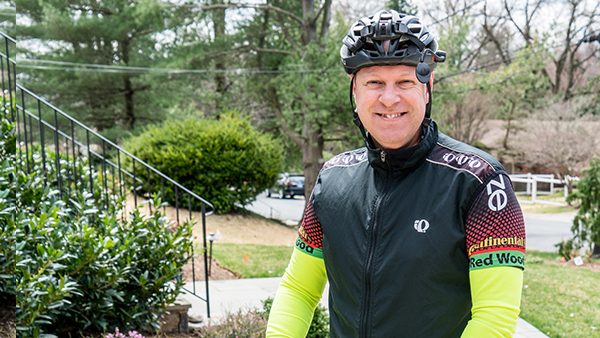 Financial powerhouse Svein Backer, 54, studies the nuances of the financial markets. As the senior member of the investment team at a large corporate pension plan, he makes educated choices to optimize the financial futures of 350,000 people.

For Svein, little did he know that the future of his own health relied on a doctor’s expert diagnosis that would ultimately lead to a lifesaving referral. “I’ve had acid reflux for at least 10 years and take medication for it,” says Svein. He thought of heartburn as simply inconvenient, but when he went in for a routine screening colonoscopy, he mentioned his issues with acid reflux. His gastroenterologist suggested that he also get a standard upper endoscopy and biopsies while under anesthesia. This would allow his doctor to take a look at his upper digestive tract—just to confirm his reflux was nothing more serious.

The endoscopy revealed a two-centimeter patch of suspicious tissue at the bottom of Svein’s esophagus, a discovery which prompted a referral to John Carroll, MD, a gastroenterologist at MedStar Georgetown University Hospital who specializes in esophageal diseases. Dr. Carroll would ultimately perform a procedure that would save Svein's life.

The results of the endoscopy and biopsies confirmed that Svein's lesion was precancerous—a highgrade dysplasia that required treatment. Just 10 years ago, treatment would have meant a major surgery to remove part or all of the esophagus. But Svein was able to benefit from an advanced therapy called radiofrequency ablation. Dr. Carroll was among the first gastroenterologists in the region to perform the procedure, and since then, MedStar Georgetown has performed more ablation procedures than any other area hospital.

During radiofrequency ablation, a thin tube called an endoscope is used to deliver energy that burns away precancerous tissue. Another ablation procedure, called cryotherapy, uses an endoscope to deliver extreme cold that freezes away tissue. Dr. Carroll and his team choose the option that is best for a particular patient—in Svein’s case, radiofrequency ablation. Both procedures take about 30 minutes and allow patients to go home the same day.

Svein left his procedure feeling fine, except for a sore throat that went away after a few days. He was back to work soon after. Today, he is feeling as good as new. “I believe that when things are important, you don’t want to settle for second-best,” he says. “I had the most experienced and successful people on my side. Dr. Carroll and the MedStar Georgetown team took great care of me, and I got right back on my professional battlefield.”

If you are experiencing chronic acid reflux or other similar GI symptoms, click here to learn more about Barrett’s Esophagus or call 202-444-8541 to schedule an appointment at MedStar Georgetown University Hospital.