This disorder affects a person’s mood and is typically characterized by changes in an individual's thoughts, feelings, and behaviors. People with this disorder may experience periods of uncharacteristic euphoria, anger, or irritability, also known as mania. Mood swings are also possible. In addition, some people with bipolar disorder may experience many of the symptoms associated with depression, such as overwhelming thoughts of sadness or hopelessness.

Biopolar disorder was previously referred to as manic depression or manic depressive disorder because of the combination of manic and depressed episodes.

An individual’s symptoms may vary, but people with bipolar disorder often go through periods of depression and mania. Some people may experience mostly depressed states, while others may have mostly manic periods. It’s also possible to have both depressed and manic symptoms simultaneously.

What are the signs and symptoms of bipolar disorder?

This disorder is characterized by shifts in a person’s mood for definable periods of time. People with the disorder may experience periods of mania or hypomania, a less extreme form of mania. Periods of depression may also occur. These periods may last a short time or persist over the long term.

These unpredictable mood swings or episodes can be difficult to manage, and they can affect a person’s thoughts and behaviors. Mood swings may occur rarely or several times a year. Symptoms can vary from person to person and change over time. It’s important to discuss changes in mood, thinking, or behavior with your doctor.

What are mania and hypomania?

Bipolar disorder is defined by episodes, or bouts, of mania and hypomania. Manic episodes may make a person feel euphoric, full of energy, or unusually angry or irritable. Mania and hypomania are distinct types of episodes, but they have the same symptoms. Mania is more severe and can cause more noticeable problems and may also trigger a break from reality called psychosis. Manic and hypomanic episodes can cause problems at work and school, or with relationships and participation in social activities.

During a manic episode, a person may experience an increase in thoughts or racing thoughts. For some people, their thoughts will move so quickly, they are unable to process them, which may result in impulsive behavior. The periods of euphoria or irritability may only last a short time, but a person may exhibit uncharacteristic behaviors, such as poor decision making or recklessness. Both types of episodes can cause the following symptoms, which affect a person’s feelings, thoughts, and behaviors:

After a manic episode, some people are able to recognize that their thoughts, feelings, and behaviors were uncharacteristic. Some will describe the episode as a discrete period outside of their normal self.

People who have experienced an episode of mania or hypomania have an increased risk of experiencing another. If untreated, periods of mania and hypomania may continue and even increase in severity and frequency over time.

If you or a loved one is experiencing several of these symptoms consistently, and it’s affecting daily activities and responsibilities, consult your doctor or therapist. Bipolar disorder is a serious illness that may worsen over time, so it is best to not ignore your symptoms. It’s important to note that even if a bout of mania occurred several years ago, it is still relevant to a medical diagnosis.

What is a major depressive episode?

People with this disorder may also experience periods of depression. During a major depressive episode, a person may feel sad, helpless, or hopeless and lose interest in activities.

Bouts of depression alter a person’s thoughts, feelings, and behaviors, and may be short or long term. During a depressive episode, a person’s thoughts may become overwhelmingly sparse or slow to process. Other symptoms may include:

What are the risk factors for bipolar disorder?

Several factors contribute to a person’s risk for developing the disorder, including both genetic and environmental factors. A person’s family history plays an important role. It is more common in people who have a relative with the condition, especially a first-degree relative, such as a sibling or parent. Other risk factors include:

In many cases, individuals experience their first episodes of mania or hypomania during their childhood or adolescence. It can be difficult to diagnose because it begins slowly and gradually worsens over time. It’s important to take changes in your mood or behavior seriously. If you experience any of the above symptoms over an extended period of time, talk to your doctor or consider seeing a behavioral health specialist. Bipolar disorder can be effectively managed with treatment, and is most beneficial when treated early on.

What are the treatments for bipolar disorder?

Treatments are aimed at managing a person’s symptoms, including mood swings and bouts of depression and mania. After careful medical evaluation and diagnosis, your doctor will recommend a treatment plan to manage your symptoms, which typically involves therapy or counseling and medication. Although many of the symptoms overlap those of depression, the drug therapy treatments are different. 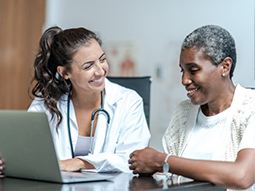 Getting the care you need starts with seeing one of our mental health specialists.