Suicide is the act of intentionally ending one’s life. Suicidal thoughts include wanting to kill oneself, preoccupation with death, and formulating a plan for one’s death. Many times, suicide is thought of as a way for people to escape unbearable pain and suffering. You do not have to struggle alone, if you or a family member is struggling with thoughts of suicide, our behavioral health team is here to help.

What are the signs and symptoms of suicidal thoughts?

There’s no single cause or symptom of suicide. Often suicide occurs when stressors and other health issues create an experience of hopelessness and despair. Changes in behavior or the presence of new behaviors can be cause for concern. Behaviors that may signal someone is thinking about suicide include:

If these warning signs apply to you or someone you know, seek help as soon as possible, particularly if the behavior is new or has recently increased. The National Suicide Prevention Lifeline, 1-800-273-TALK (8255) is available 24 hours a day, seven days a week.

What are the risk factors for suicide?

Suicide does not discriminate. People of all genders, ages, and ethnicities can be at risk. Suicidal behavior is complex and there is no single cause. In many cases, several factors contribute to a person’s suicide attempt.

Environmental and historical factors that may also increase a person's risk for suicide include:

Many people who experience these risk factors do not attempt suicide. Often family and friends are the first to recognize the warning signs of suicide. It is important to note that suicide is not a normal response to stress. Suicidal thoughts or actions are a sign of extreme distress, not a harmless bid for attention, and should not be ignored.

Thinking about suicide can be scary. You may have strong feelings that are difficult to deal with, but it’s important to remember that you are not alone. Many people think about suicide, which does not mean you will do it, or that you are “going crazy.” There are ways to prevent suicide.

Building relationships with other people and consulting with a behavioral health specialist are two ways you can prevent suicide. Feeling connected to others is a big part of prevention. You can get involved in your community or church, or spend time with friends and family.

Behavioral health specialists, such as therapists, are also here to help. If you’re feeling sad, overwhelmed, like you can’t go on, or if you’re not enjoying things in your life that once brought you joy, seek help. There’s no reason to delay treatment. Therapists can help you express your feelings of suicide, while providing tools and resources to help patients cope with their thoughts.

How can I help someone who is thinking about suicide?

If you are worried about someone who is expressing thoughts of suicide, there are ways you can help. First and foremost, ask the person if they want to end their life soon and if they have a plan. If they have a plan to kill themselves soon, it is an emergency. Call the Suicide Crisis Line at 1-800-784-2433, or 911. Do not leave the person alone.

If the person does not have an immediate plan to end their life, they still need help and you can help by listening and finding support. Listen to their feelings and thoughts. Show them that they are not alone. Be calm and supportive, while acknowledging they are in a lot of pain. It’s important to keep in mind that asking a person about their suicidal thoughts will not give them the idea to kill themselves.

Show the person you are a confidante, don’t make promises you can’t keep. Be careful not to judge them or place blame, it’s no one’s fault when someone is thinking about suicide. Understand they have a serious problem and do not give advice.

While you can be supportive and help someone, who is thinking about suicide, it’s important they talk to a therapist or their physician. Encourage them to seek help from a behavioral health specialist. 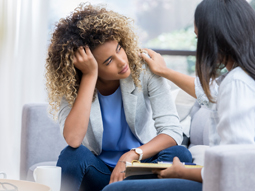