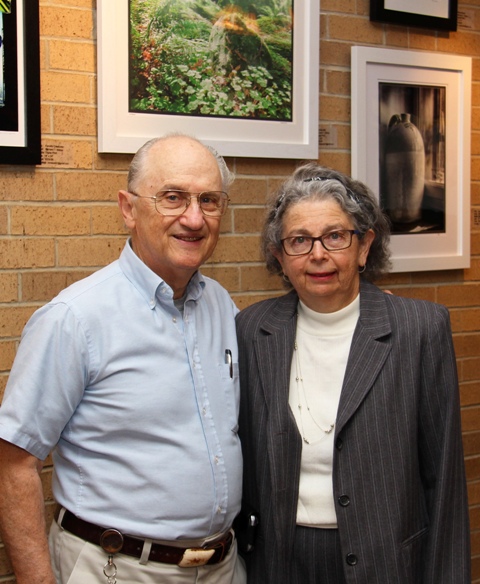 Artist to Donate Portion of Funds Raised to Scholarship Fund

Leonardtown, Maryland – MedStar St. Mary’s Hospital is hosting an art show this fall by local artist Bernard “Bernie” Matus. The Leonardtown artist’s photographs and digital designs will be on display in the hospital’s Atrium. Bernie will be donating a percentage from any works sold during the show to the St. Mary’s Hospital Foundation’s scholarship fund.

“I love fine arts,” said Bernie, “and one of my favorite print artists is Robert Rauschenberg. I used to study his works and I realized I could do that with a computer, so I developed my own techniques.”

Bernie’s interest in photography started as a 10-year-old boy when he purchased his first camera with money he earned from his paper route. Nearly 60 years later, he is still taking photos. Following a career as a teacher in New York and school administrator in Pennsylvania, Bernie began to devote more time to his passion following his retirement. He and his wife, Nancy, a former dermatologist in practice for more than 30 years, moved to Leonardtown in 2009 to be closer to their daughter and her family.

“I know how important the hospital is to the welfare of the community,” said Nancy, “and I think what is nice about MedStar St. Mary’s Hospital is that they have the scholarship program to help students who may not otherwise be able to go to school and learn these skills.”

The St. Mary’s Hospital Foundation provides scholarships to students interested in pursuing careers in the healthcare industry. Since 2001, the Foundation has awarded 132 scholarships.

“We like to keep donations more local so that you know the money is going to people that live in the community,” said Bernie. “It is a nice way to see money being used on a local level.”

An artist reception was held Oct. 3 in the Atrium as part of the hospital’s kickoff for its annual philanthropy campaign, Giving: The Power to Heal. Donations made during this year’s campaign will help fund a major renovation to the Atrium, which is expected to begin next year. The renovation will include expansion of the eating area, new furniture, new lighting and new flooring and wall treatments.

MedStar St. Mary’s Hospital’s Atrium is located next to the hospital’s cafeteria, the Café at Buena Vista, which is open to the public.

Visit MedStarStMarys.org/PowerToHeal to learn more about the 2016 annual philanthropy campaign.

About MedStar St. Mary’s Hospital
MedStar St. Mary's Hospital (MSMH) is a full-service community hospital, delivering state-of-the-art emergency, acute inpatient and outpatient care in Leonardtown, Maryland. Nestled in a waterside community, MedStar St. Mary's provides advanced technology with a dedication to excellence in all services provided. The not-for-profit hospital has been named among the nation’s Top 100 Hospitals™ and is an eight time recipient of the prestigious Delmarva Medicare Excellence Award. In addition, MSMH received the Maryland Performance Excellence award at the Platinum level in 2014 – the highest in the state. Our staff is committed to providing quality and compassionate medical care for all patients by coupling innovation with our outstanding team of Medical Staff members, associates and volunteers. Visit MedStarStMarys.org to learn more.