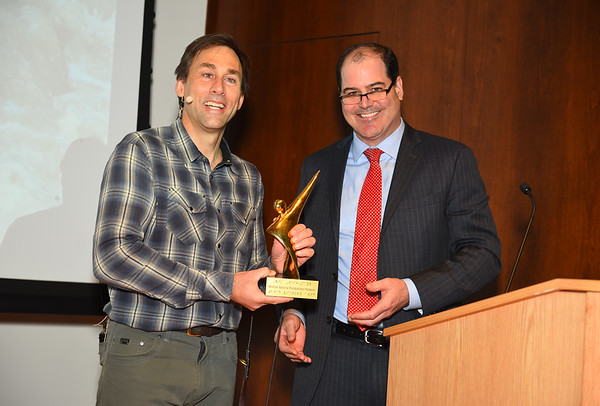 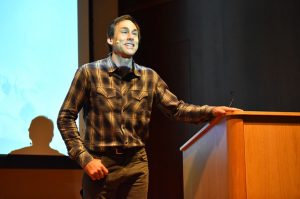 At age 13 Erik Weihenmayer lost his eyesight due to a condition called retinoschsis, characterized by the abnormal splitting of the retina’s neurosensory layers.
Determined not to let his blindness become him, Erik learned to rock climb. Through time, he took that determination further – from simple rock formations to daring challenges very few humans would try – conquering all seven summits of the world and boldly attempting kayaking down the roiling rapids of the Colorado River.

Erik recently spoke to MedStar NRH Team Members at a special event, held at the Carnegie Institute in Washington, D.C.,
Weihenmayer talked about his book No Barriers: A Blind Man’s Journey to Kayak the Grand Canyon. He said that he was not going to let his disability prevent him from his daring feats. “Some people are campers,” said Weihenmayer. “I’m a climber.”

Some facts about Erik Weihenmayer:
• May 25, 2001 – Erik became the only blind person to reach the summit of Mt. Everest
• At age 13, he developed a condition known as retinoschsis (an eye disease characterized by the abnormal splitting of the retina's neurosensory layers, usually in the outer plexiform layer. Most common forms are asymptomatic, some rarer forms result in a loss of vision in the corresponding visual field) which robbed him of his vision
• He was a wrestler in high school despite being blind and represented his home state of Connecticut in a national junior wrestling championship in Iowa
• He discovered rock climbing as a teenager and developed the ability to scan aspects of rock formations with his hands and feet as he climbs
• Graduated with a double major from Boston College
• Was a middle school teacher and wrestling coach

For more information about Erik, check out his website - https://touchthetop.com/index.php

About MedStar National Rehabilitation Network
The MedStar National Rehabilitation Network is a regional system of rehabilitation care that offers inpatient, day treatment and outpatient services in Washington, D.C., Maryland and Northern Virginia.
The Network’s interdisciplinary team of rehabilitation experts provides comprehensive services to help people recover as fully as possible following illness and injury. Rehabilitation medicine specialists, psychologists, physical and occupational therapists, and speech-language pathologists work hand-in-hand with other rehab professionals to design treatment plans tailored to each patient’s unique needs. Rehabilitation plans feature a team approach and include the use of state-of-the-art technology and advanced medical treatment based on the latest rehabilitation research.
The Network provides comprehensive programs specifically designed to aid in the rehabilitation of adults and children recovering from neurologic and orthopaedic conditions such as amputation, arthritis, back and neck pain, brain injury, cancer, cardiac conditions, concussion, fibromyalgia, foot and ankle disorders, hand and upper extremity problems, post-polio syndrome, stroke, spinal cord injury and disease, and sports and work-related injuries.

For more on MedStar National Rehabilitation Network and to find a location near you, log on to MedStarNRH.org.