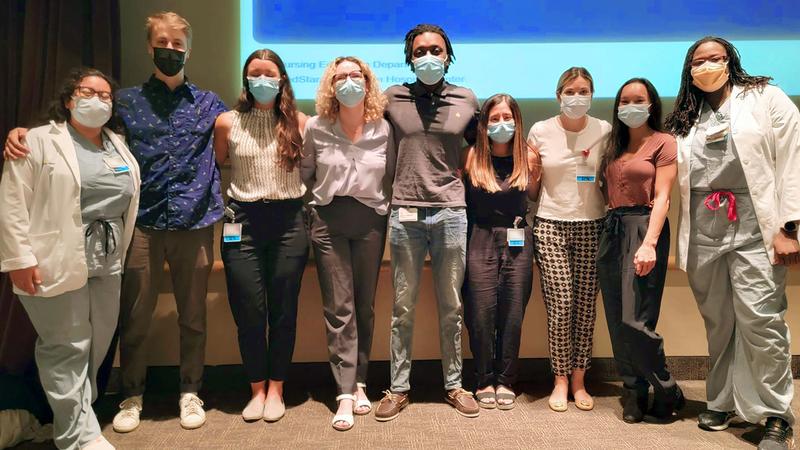 The highly regarded year-long training program is re-designated for 10 years.

WASHINGTON – The highly-regarded Vizient/AACN™ Nurse Residency Program (NRP) at MedStar Washington Hospital Center has once again earned accreditation from the Commission on Collegiate Nursing Education (CCNE). It is the only CCNE-accredited nurse residency program in the nation’s capital.

The year-long training program for new nurses includes didactic, simulation, and mentored clinical education to support more than 350 nurses annually, as they move from academic study to clinical practice. Coaches, educators, and nurse specialists guide new-to-practice nurses through orientation and during their first year of clinical practice. In addition, the NRP provides nurses training in clinical specialties, such as critical care, cardiac services, and perioperative nursing, and includes an evidence-based practice project.

Conceived by the American Association of Colleges of Nursing (AACN) in 1996, CCNE officially began accrediting operations in 1998. CCNE is an autonomous accrediting arm of AACN, contributing to the improvement of the public’s health. The entry-to-practice accreditation is valid for 10 years.

“Our nurse residency program helps launch the clinical careers of many nurses in the District of Columbia,” said Tonya Washington, MSN, RN, NEA-BC, senior vice president and chief nursing officer for MedStar Washington Hospital Center. “The re-accreditation is a testament to our continued high standards, our continued program excellence and our continued commitment to the community and the profession of nursing. It is a notable achievement by all at MedStar Washington who help develop the critically needed nurses of today.”

To date, more than 2,500 new graduate nurses have participated in the nurse residency program since its inception in 2012.