"As parents of three children, my wife Ashley and I recognize the need for and value of quality pediatric care and services close at hand. When we learned about the breadth of pediatric services MedStar Franklin Square provides to the community, we knew this was a hospital we wanted to be associated with," said Todd Heap, former tight end for the Baltimore Ravens. "I am extremely impressed and moved by the great care and compassion the hospital provides to children and families in the community."

Heap's generous pledge to raise $1 million was celebrated at a groundbreaking for the patient care tower in October 2007. At the event, MedStar Franklin Square executives and board members announced the launch of a $10 million capital campaign which was jumpstarted by Heap's generous donation. 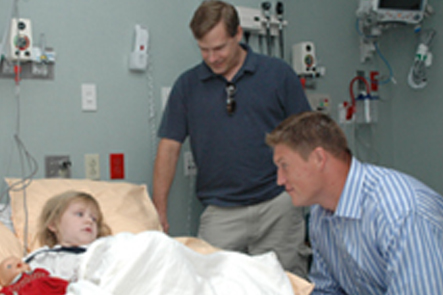 "While our employees and those who have used our pediatric services know the vital support MedStar Franklin Square provides, it is encouraging to have someone outside our community also believe in what we are doing," stated Carl Schindelar, former president of MedStar Franklin Square. "We have a longstanding commitment to the physical, emotional, and social needs of area children. Todd's commitment will go far in helping support our mission to provide high-quality and comprehensive pediatric and family-centered care and services."