We offer expert ear, nose, and throat (otolaryngology) specialists. We are committed to providing a variety of diagnostic and treatment options – all within a trusting and compassionate environment. Our pediatric otolaryngology services include:

PE tube surgery is a surgical procedure to drain fluid from and/or ventilate the middle ear, and place a pressure equalization (PE) tube in the eardrum. Children may need this procedure if they get ear infections often. They may also need it if fluid has built up behind the eardrum and is affecting hearing or speech development.

In this procedure, a small opening is made in the eardrum. The fluid is drained through this hole. Then the PE tube is placed to keep the opening in the eardrum patent. The procedure allows air to flow into the middle ear space. This gives the child's ear condition time to heal and helps to prevent new ear infections. Usually, the procedure is done in both ears.

Lingual frenotomy is a surgery to cut or remove the band of tissue (frenulum) that connects the tongue to the bottom of the mouth. This procedure is needed when the frenulum is too tight or too thick and causes difficulty speaking or eating. Lingual frenectomy results in greater range of motion for the tongue.

Frenotomies performed on newborn babies allow them to feed more effectively. Michelle Merola-Lally, PA-C is a lactation specialist who works closely with Dr. Earl Harley during these procedures to make feeding a more comfortable and effective experience for mother and baby.

PANDAS, or pediatric autoimmune neuropsychiatric disorder associated with streptococcal infections, is a childhood nervous system disorder. Children with the disorder develop one or both of these conditions:

PANDAS very rarely occur after puberty. It is a rare and new disorder that experts are still learning about.

Typically, the noisy breathing begins at birth or very soon after. The noise occurs when the baby is breathing in but there no associated sound when she breathes out. Typically, the sound is worse when the infant is on his back but better on the side or upright position. Also, it is not uncommon for the infants to sound worse when he is feeding. There may be associated spitting up or excess burping as these infants may have “acid reflux” associated with the breathing.

The otolaryngologist will take a detailed history including details of the pregnancy and the birth. Questions such as, "Did your child need assistance with breathing at birth?" will be asked. A complete examination of the ears, nose, throat, neck, and chest will be conducted. Included will be a measurement of the baby’s oxygen saturation and other vital signs. Most of the time the otolaryngologist will perform a procedure called a flexible laryngoscopy. Here a small fiberoptic tube will be inserted into the nose and the airway from the nasal cavity to the voice box will be assessed. This procedure takes about 5 minutes and does not require sedation or special preparation. Most of the time pictures and videos are obtained. Rarely is any other procedure needed but you may be asked to return for a follow-up evaluation.

If your child required a breathing tube, especially if he was premature, there may be scar tissue formation causing the noise. If your child has a birth mark that looks like a strawberry, there may be an association that would require further evaluation. In these circumstances additional information obtained from X-rays or scan may be asked for. An evaluation under anesthesia may be required. This procedure is called a direct laryngoscopy and bronchoscopy (DLB). Here, the entire airway is examined including the lower trachea and its branching into the lungs.

Laryngomalacia is usually self-limiting, and it is not uncommon that it resolves spontaneously by 6 months of age but may last longer. Frequently the child is given a medication for acid reflux. Only in very rare case will a child require surgical intervention.

Tonsillectomy and adenoidectomy for children

Tonsillectomy and adenoidectomy are surgeries to remove tissues in the mouth and throat called the tonsils and adenoids. Often, they are done at the same time in a surgery called adenotonsillectomy. Tonsils and adenoids normally work to protect the body from infection. This procedure may be done if these tissues repeatedly become enlarged or infected and if other treatments are not effective.

This is a common procedure with well-recognized safety guidelines. The sore throat afterwards can be well-controlled with drinking fluids and non-opioid pain medicine. Problems that can occur, include bleeding, infection, scarring, ear pain, nausea, and vomiting, and changes in your child's voice or sense of taste.

What happens during the procedure?

Our experts are involved in clinical research involving the following: 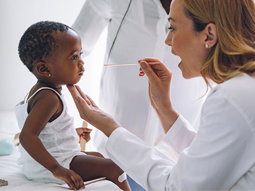 Getting the care you need starts with seeing one of our pediatric specialists.
View Our Providers