A Journey Worth Taking

A Journey Worth Taking 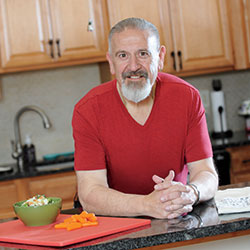 Quest for Better Health Leads to a New Outlook on Life

Four years ago, Angelo Campanella was far from the picture of health he is today. Only 53 years old, he weighed close to 400 pounds and had a number of health issues, including diabetes, high cholesterol, high blood pressure and sleep apnea. “I made a lot of poor life choices over time and knew I needed to make some changes. But it wasn’t until I developed diabetic foot ulcers that wouldn’t heal that my journey really started,” Campanella says. “Diabetes can cause a lot of serious problems and foot ulcers are just one of them. It can also affect your heart health and your ability to lose weight,” explains Adline Ghazi, MD, director of the Diabetes Care Program at MedStar Good Samaritan Hospital, who Campanella sees for his diabetes.

Campanella was referred to the Hyperbaric Medicine and Wound Healing Center at MedStar Good Samaritan, but ended up needing surgery to effectively treat the ulcers. While recovering, his doctors noticed some abnormalities in his blood work that concerned them and ordered additional tests. They found heart disease so severe, they immediately admitted him to MedStar Union Memorial Hospital for cardiac bypass surgery.

After his bypass, Campanella started to take better care of himself. He enrolled in the cardiac rehabilitation program in the Good Health Center at MedStar Good Samaritan and his diabetes stabilized. But he couldn’t lose weight, which was hindering his efforts to manage his diabetes. He decided to look into weight loss surgery. At the suggestion of his doctors, he scheduled a consultation with Christopher You, MD, FACS, FASMBS, medical director of Minimally Invasive and Bariatric Surgery at MedStar Franklin Square Medical Center.

“In addition to being overweight, Angelo was on insulin and many other medications for his diabetes and other related health conditions. I recommended a gastric bypass, which would not only help him lose weight but could also reduce the severity of his diabetes,” Dr. You says.  Gastric bypass surgery works by changing the anatomy of the gastrointestinal tract to limit the amount of food you can eat. The surgery also changes the absorption rate of food, which results in beneficial metabolic changes.

“When combined with a comprehensive treatment plan, bariatric surgery can be an effective tool for achieving long-term weight loss and a better quality of life. More importantly, it helps improve many obesity-related conditions, including type 2 diabetes, high blood pressure, heart disease and more,” adds Dr. You.

Dr. You stresses that individuals considering bariatric surgery need to understand and be committed to the lifestyle changes required after surgery. “It’s important to remember that weight loss success depends on other factors too, such as nutrition, exercise and behavior modification. Angelo was committed to making the changes needed and was enthusiastic throughout the entire process,” says Dr. You.

Prior to the surgery, Campanella attended MedStar Franklin Square’s preoperative weight management program, dropping quite a bit of weight as a result. When he went in for the surgery in June 2015, he weighed around 330 pounds. The day after surgery, Campanella’s diabetes was in remission and he no longer needed multiple medications or daily injections.

He still sees Dr. Ghazi at MedStar Good Samaritan and is on medication for blood sugar maintenance. “Angelo had a lot of health problems for someone his age and his quality of life was not good. But, he truly wanted to get better and took charge. That really makes a difference,” Dr. Ghazi notes.

Today, Campanella is 100 pounds lighter and his former 56-inch waist is now just 36 inches. Healthier than ever, he frequently takes water aerobics classes at the Y, plays billiards with a number of Amateur Pool Player Association teams several nights a week, and enjoys walking his dog, Sahara, a couple of hours every day.

He is extremely grateful for the support he received during the past four years. “My parents, Vito and Laura, my brother, Pietro and my girlfriend, Marye, all took care of me and helped keep me motivated throughout this process. And my colleagues at Calvert Mechanical Solutions, where I have worked for 29 years, have been great. I was out a lot, especially after my foot and heart surgeries, and there was never any question that my job would be waiting for me,” he says.

He is also thankful for the compassionate care he received from the many healthcare providers at MedStar Health who helped him turn around his life. “This part of my journey—sharing my story—was never expected. I love talking to people who are on the fence about getting healthier, especially about gastric bypass,” Campanella adds. “I hope my experience encourages others who are struggling with health issues.”

This article appeared in the summer 2017 issue of Good Health. Read more articles from this issue.

Click below to learn more about our Diabetes Care Program or call 443-444-3991 for a physician referral.