How cochlear implants can work when hearing aids don’t help

How Cochlear Implants Can Work When Hearing Aids Don’t Help

Between 2000 and 2010, data from the U.S. Census Bureau show huge increases in the numbers of older Americans between the ages of 80 and 99. Today, more people than ever need solutions for hearing loss caused by aging or as a result of injuries, infections or other conditions.

But the most common therapy—hearing aids—don’t work for everyone. Hearing aids simply make sounds louder, so if you have little to no hearing now, they might not do you much good. For these patients, cochlear (COKE-lee-ur) implants may be able to restore hearing.

A cochlear implant is a device implanted surgically in the ear that can send sound signals to the auditory nerve and restore hearing. It’s often thought of as a childhood treatment, and they’re approved by the Food and Drug Administration (FDA) for children as young as 12 month. But adults can benefit from cochlear implants as well.

Let’s walk through how we determine whether a patient is a good candidate for a cochlear implant, as well as what to expect from the surgery and the device itself, such as how your implant can interface with your smartphone, TV, or other Bluetooth-connected devices.

Call 202-877-6733 or click below to learn more about cochlear implants and hearing restoration.

Who is a good candidate for cochlear implants? 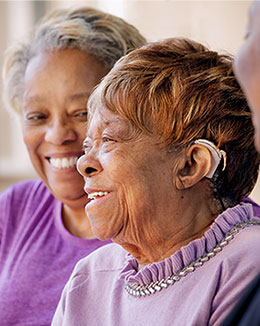 Edna Whitted with her cochlear implant.

A person has to have some level of hearing for hearing aids to work. We determine this from a baseline hearing test, then we typically recommend trying hearing aids for three to six months. If they don’t give significant benefit, we consider cochlear implants.

Implantation surgery and the programming process

Cochlear implants are advanced technological devices. Choosing the right implant depends on many factors, such as:

After you and your doctor choose a device, the next step is surgical implantation. Cochlear implant surgery is an outpatient procedure that takes about two hours to complete. You’ll be under general anesthesia in most cases, so you’ll be asleep during the surgery. In rare cases, the surgery can be performed under local anesthesia with sedation. Afterward, we’ll monitor you in the hospital for a few hours before we send you home.

Cochlear implants can have a dramatic effect on a patient’s quality of life. One patient’s speech and understanding test showed he was at less than 15 percent hearing in one ear. Within six weeks of his cochlear implantation, he was already up to 90 percent hearing in that ear. We scheduled an implantation for his other ear, which had initially scored at 20 percent in his testing, and he got up to nearly 100 percent after that procedure with both ears together.

Once you recover from the implantation surgery, you’ll have a series of appointments over four to six weeks to adjust your device. We’ll fine-tune your device to help you hear better in certain settings, such as quiet restaurants or loud concerts. These adjustments can make the difference between hearing at 75 percent capability and 100 percent. We recommend seeing your audiologist once or twice a year after that for regular reprogramming.

While the average hearing aid will last three to seven years before it needs to be replaced, cochlear implants are designed to last 80 years. But that’s a long time to be stuck with one piece of technology, considering most of us don’t even wait two years before upgrading our smartphones.

Though the interior components of cochlear implants are designed to stay in place for the rest of a patient’s life, manufacturers now are creating their products, so that the exterior components can be upgraded. For example, several newer models have Bluetooth compatibility. These devices can stream sound directly from your phone, computer, TV or other device.

If you have hearing loss and hearing aids haven’t worked, don’t give up hope. We have the technology to help people hear better, and more advanced cochlear implants are coming out every year.

Call 202-877-6733 or click below to request an appointment with one of our audiologists.