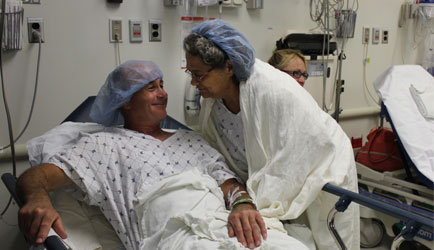 Brenda Hudson of Owings, Md., was the first person ever to receive a life-saving kidney transplant from a living donor at MedStar Georgetown University Hospital. Her sister, Michelle, donated a kidney to save Brenda’s life.

The average life of a living donor kidney is 17 to 18 years, but Brenda’s kidney lasted a staggering four decades before failing in 2015. She began dialysis but was in need of a new kidney. Now, at the age of 57, her husband of seven years, Dana Hudson, stepped forward. Last summer, he gave Brenda her second life-saving gift—a new kidney, 40 years after her first transplant surgery.

"To be fortunate enough to get this gift from a second living donor—I am still in disbelief."  - Brenda Hudson, Patient

“It works beautifully,” Brenda says. “As soon as you get that new kidney in, you start feeling better right away. To be fortunate enough to get this gift from a second living donor—I am still in disbelief. I didn’t think it would happen.”

“The miracle of her first transplant is that it lasted so long,” he says. “And then to get a second from another living donor is just wonderful. Now she has a perfectly functioning kidney again.”

“I am so blessed,” Brenda agrees. “It’s just so hard to believe there were two people willing to do this for me.”

The experience has given Brenda a unique view of medical advancements in the world of transplants over the last four decades. “The tools available now are so much simpler than 40 years ago,” she says.

“There wasn’t as much known back then about transplants, and people were very wary,” explains Matthew Cooper, MD, director of Kidney and Pancreas Transplantation at the MedStar Georgetown Transplant Institute. “Back then, Brenda had her own special nurses and was practically wrapped in a plastic bubble because there was such a fear of the unknown. Her sister also had a much larger incision than we use now.”

After her first transplant surgery, Brenda was in the hospital for a month. This time it was just five days, and she started feeling better right away. Her husband, Dana, spent only three days in the hospital following his procedure as her donor.

Dana says he recovered quickly from a surgery he describes as painless. Surgeons made only four incisions, all 1 cm or less, to laparoscopically remove his kidney. He encourages anyone who might be interested in becoming a living donor to consider the benefits of this life-saving surgery. “It makes me feel so good,” he says. “I know what she was going through on a daily basis, and I am so glad I could help her.”

Brenda is now seeing just how far post-transplant care has come. Instead of large amounts of steroids, she is taking a more advanced immunosuppressant medication to reduce the risk of the body rejecting the organ, which she says is much easier on her system.

“It’s so exciting how far we’ve come in 40 years,” Dr. Cooper says. “When patients take their medication and stay in touch with their doctors about post-operative care, results are excellent.”

Brenda says her life hasn’t just returned to normal—it’s gotten better. She’s now planning to travel and apply for her first-ever passport. “Now that I feel so good, I have to get one and travel,” she says. “I feel awesome.”

For more information about living donor transplants, visit MedStarGeorgetown.org/GiveLife or call 202-444-3714 to make an appointment with one of our physicians at the MedStar Georgetown Transplant Institute.