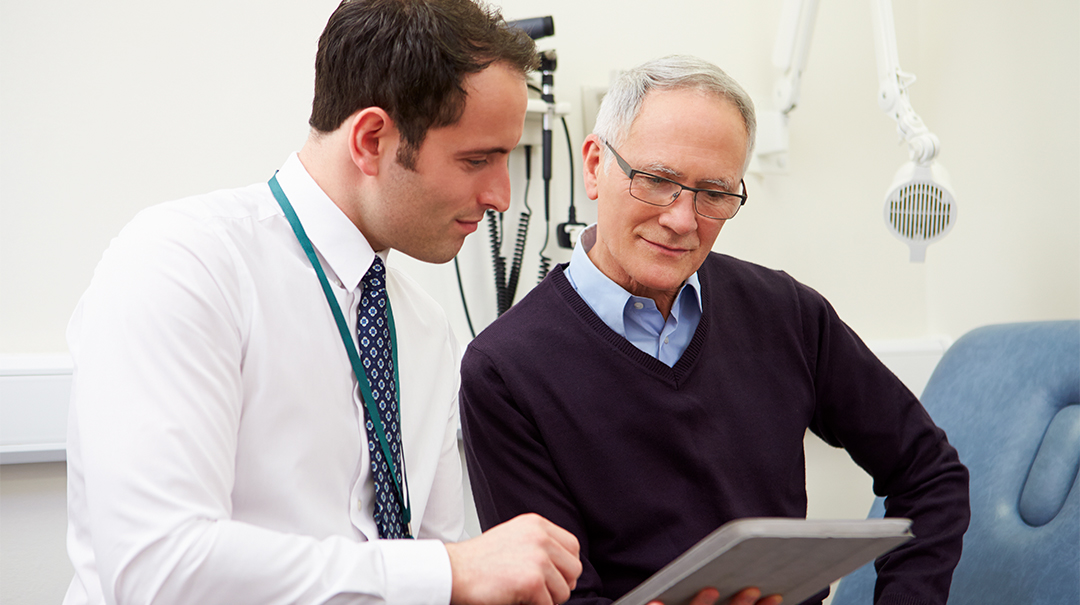 Benign prostatic hyperplasia (BPH), or an enlarged prostate, affects many men as they age. In fact, about 50 percent of men ages 50 to 60 and 90 percent of men over 80 have BPH. Because BPH is so common, it’s vital that people receive quality treatment such as GreenLight laser surgery that can help alleviate their symptoms.

The procedure is also less invasive than other BPH treatment options, so patients typically recover quicker.

We saw one patient who was in and out of emergency rooms for several months because he kept experiencing difficulty urinating and had a lot of pain due to urinary retention. While in the emergency room, he would have a catheter—a thin tube that drains the bladder—placed and removed, and he would be OK for a few days before symptoms returned. He eventually opted for GreenLight laser surgery. Following the procedure, his stream was normal, like it was in his 20s. Not only could he sit through meetings at work with no issues, but he could even watch nine innings of a baseball game without having to use the bathroom.

How Does GreenLight Laser Surgery Work?

During GreenLight laser surgery, we vaporize prostate tissue that is blocking the outlet of the bladder. We do this by placing a scope near the prostate while patients are under anesthesia and using it to guide a laser fiber up to the prostate to gently vaporize the prostatic tissue. The laser is absorbed by hemoglobin molecules in the red blood cells during the process, which results in less bleeding than other treatments. After we eliminate the prostatic tissue, individuals return home with a urinary catheter that they either remove themselves or at the hospital the next day.

Other treatment options, such as transurethral resection of the prostate (TURP), surgically shaves the prostate down from the inside. Surgeons primarily used TURP to treat BPH in the past and typically it’s just as effective as GreenLight laser surgery in the long run. But TURP can be more invasive, requiring patients to stay the night at the hospital, and can result in longer recoveries. Patients who undergo TURP also often have a longer period until the bleeding in their urine resolves.

How is BPH Diagnosed, and Who’s a Candidate?

We typically diagnose BPH after hearing of a patient’s symptoms, most commonly the frequent or urgent need to urinate. We often ask patients to complete questionnaires to measure the extent to which their symptoms bother them, as well as the strength of their urine stream. Ultimately, if a man has problems urinating, we determine if it’s BPH by measuring the size of their prostate via an ultrasound and evaluate the appearance of their prostate with a cystoscopy, a procedure that uses a small camera to identify signs of BPH, such as the narrowing of the urethra where it passes through the prostate gland.

#BPH is often first recognized when men have the frequent or urgent need to urinate. Once this is determined, patients usually complete a questionnaire and may undergo various studies to confirm an #enlargedprostate. https://bit.ly/2Z0Tkbu via @MedStarWHC

The best candidates for GreenLight laser surgery are men who want a treatment option that is going to last long-term. While most men are candidates for the surgery, it’s not the right option for everyone (for example, men with BPH who plan to have children). Following a GreenLight laser surgery, patients can experience retrograde ejaculation, where semen travels backward into the bladder during sex rather than exiting through the penis. Men who can’t or don’t want to go under anesthesia also are not good candidates for this procedure.

What Risks are There?

As with any surgery, there are inherent risks associated with anesthesia. But for the surgery itself, about three-quarters of guys we see who undergo this procedure develop the previously mentioned retrograde ejaculation, although, this complication doesn’t affect their ability to orgasm or have erections.

Furthermore, about three to five percent of men we see develop urinary incontinence, which is when a few drops of urine leak out when they sneeze, cough, or do some strenuous activity. For many guys, it goes away after a few weeks. For some, the side effects can be long-lasting.

Experiencing a frequent and urgent need to urinate, a weak urine stream, or another symptom of BPH? Request an appointment with a urology specialist: Call 202-877-3627 or click below to make an appointment.