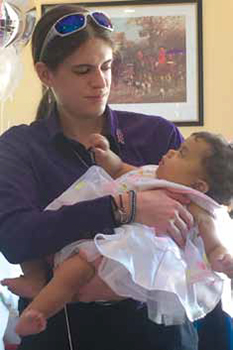 Diana Rotter, a 30-year-old from Denton, Md., is a movie theater manager who loves watching films. She never imagined one day she would star as the real-life hero in a dramatic storyline of her own.

Last July, Diana’s mother came home from a christening at her church distraught after learning the baby being celebrated would die within months if she didn’t get a new liver.

The little girl, Natalia, the daughter of a former co-worker of Diana’s mother, was born with biliary atresia, a rare and life-threatening condition that destroys bile ducts in the liver.

“When they mention transplant, it is literally a parent’s worst nightmare,” says Diane Walker, Natalia’s mother. “I thought it meant she would die.”

Baby Natalia had been added to the national organ transplant waiting list for a cadaver liver, but the wait for a cadaver liver can be long. Luckily, living donors are also possible for liver transplants, because the donor organ regenerates. None of Natalia’s close relatives were a match as a living donor. But outside donors with compatible blood types, who pass a series of other compatibility tests, also have the chance to save a life.

When Diana’s mom asked her if she would consider donating part of her liver to this baby, she said yes.

“I knew I would be helping someone,” says Diana. Fortunately for 1-year-old Natalia and her family, Diana was a match.

“More and more people are realizing they can save a life through a donation like this,” says Thomas Fishbein, MD, executive director of the Transplant Institute at MedStar Georgetown University Hospital. “There is nothing more heroic than donating a kidney or a portion of your liver to save someone’s life. Now that we can do it with such a high degree of safety, it is becoming more common.”

It took doctors four hours to remove 20 percent of Diana’s liver and nearly eight hours to transplant it into Natalia. Both procedures were successful.

“Pediatric liver transplantation is one of the most highly complex and technical undertakings in surgery,” Dr. Fishbein says. “Despite that, we have achieved a 98 percent success rate with it. This has led to our becoming one of the largest pediatric transplant programs in the nation. As a result, we have so many little babies waiting for the exceptional opportunity for a second chance like this.”

The transplanted liver will grow to full size in Natalia, and Diana’s liver will regenerate in about 90 days.

Diana took off six weeks from work to heal, with the hope that she would be back in time for the premiere of “Star Wars: The Force Awakens.” Though she wasn’t quite ready to work on opening night, she was able to see the movie as a fan.

Today, Diana is back to work full- time. “Sometimes it almost seems like it was a dream, since I do feel entirely back to normal,” she says.

Natalia is flourishing—her skin is no longer jaundiced, she’s grown six teeth, her hair has grown back and she is almost walking, to the delight of her family.

“Within the first two weeks she was a completely different baby—she came back to life,” her mother says. “There are heroes out there. Diana, this woman who doesn’t even know us, went into the operating room and gave us a piece of her liver, receiving nothing in return. Her mission was to save my daughter’s life. Now our mission is to tell her story. We are so grateful.”

Give the gift of life. A living donor transplant can eliminate a long wait for a donor organ, and it provides the best quality organ possible. 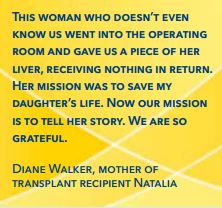