Managing Movement Disorders in the Elderly

Managing Movement Disorders in the Elderly 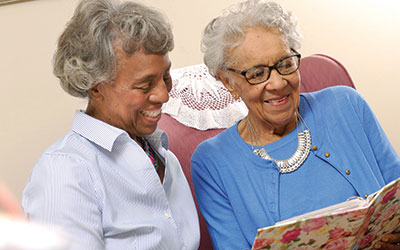 The ability to move—and move easily—is something most of us take for granted. But movement is actually a complex process requiring several different parts of the brain to work together with many muscle groups. However, as we age, many individuals develop movement disorders.

“Movement requires continuous communications between the brain and the muscles,” says Lynn Chouhfeh, MD, a neurologist and Parkinson’s disease and movement disorders specialist at the Center for Successful Aging at MedStar Good Samaritan Hospital. “A movement disorder results from a breakdown in these communications and can sometimes lead to difficulty walking, involuntary movements, tremors, or problems with posture and balance. This can be extremely debilitating, severely impacting a person’s quality of life.”

Movement disorders are very common, especially in the elderly population. The most widely known movement disorder is Parkinson’s disease, a chronic, progressive neurological disorder that affects a small area of nerve cells deep within the brain. Approximately one million Americans have Parkinson’s disease, including one out of every 100 people over age 60. And it’s the second most common neurodegenerative disease after Alzheimer’s.

That’s what patients and their families will find at the Center for Successful Aging. “We provide elderly patients, particularly those with complex conditions, convenient access to the specialists they might need, all in one place,” Dr. Courtin says. “We offer a comprehensive array of health services to the older adults in our community.”

Lila Shelton, a 90-year-old with Parkinson’s disease, is one patient who has benefited from the expert care available at the Center for Successful Aging. Her daughter and caregiver, Shirley Byron, explains, “Mom was living in Oklahoma and had received a diagnosis of Parkinson’s disease. I moved there to care for her. Her doctor prescribed medication, but it made her nauseated and extremely tired. After talking to the doctor about it repeatedly and not getting any answers, I just stopped giving it to her.”

Byron moved her mom back to Baltimore and started looking for a healthcare provider in the area who specialized in treating the elderly. She learned about the Center for Successful Aging on the Internet. “In the meantime, Mom’s symptoms had gotten worse. She was less steady on her feet and had lost her ability to speak,” she explains. “At the same time, this was taking a toll on me—physically and emotionally.”

After an initial consultation at the Center for Successful Aging, Shelton was referred to Dr. Chouhfeh. “While there is no cure for Parkinson’s disease, there are a lot of ways we can help. The challenge is that every patient is different and responds differently to treatment,” says Dr. Chouhfeh. “When I first saw Lila, I was barely able to understand her. She had dif culty walking and her movements were very slow and stiff.”

To improve Shelton’s symptoms, Dr. Chouhfeh decided to try medication again. “The difference is that I started slowly and gradually increased her dose. She tolerated it well with no side effects. Shortly thereafter, she was able to speak louder, and her other symptoms began to improve.”

The turnaround was almost miraculous,” Byron says. “We can now communicate. Mom is a shy person to begin with and not being able to talk made her withdraw even more. Now she is much better.”

Shelton has continued treatment under the care of Dr. Chouhfeh. She is in physical and speech therapy and is doing well. When asked how she feels about the Center for Successful Aging, she says, “They gave me my voice back ... I am so pleased to be able to talk again.”

“All persons with Parkinson’s do not develop the same symptoms, and any symptoms that do develop may change over time as the disease progresses,” Dr. Chouhfeh notes. “So it is very important for people with the disease and their families to work closely with their doctors and to seek advice from a movement disorders specialist, who can best manage the more complicated aspects of the disease.”

Learn more about the Center for Successful Aging at MedStar Good Samaritan Hospital.