How we can manage breast cancer that spreads to the bones

How We Can Manage Breast Cancer That Spreads to the Bones 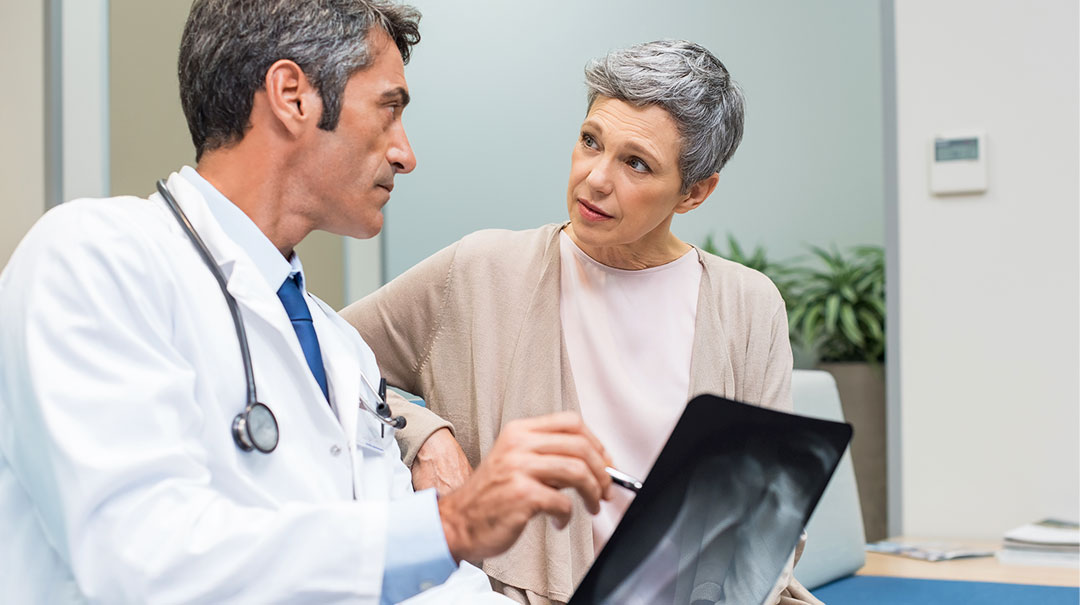 Has my cancer spread?” After a woman has had the time she needs to process a cancer diagnosis, this tends to be one of her first questions.

The process of a cancer spreading is called metastasis. When breast cancer spreads, the bones are one of the most common places it goes. One study noted that 70 percent of breast cancer patients had a cancer that spread to at least one bone. As an orthopedic surgical oncologist, I care for women whose cancer has spread to the bones and who need surgery to reduce pain and improve their quality of life. My colleagues and I work closely with our breast oncology team to provide advanced therapies and to advocate for women who are being treated for breast cancer or who have been treated for it in the past. Unfortunately, breast cancer can come back years after beating the disease, and it’s vital that women recognize the subtle signs that a cancer has spread to the bones.

Many times, the first symptom a woman notices is pain in certain bones, including the:

These are some of the most common bone sites to which breast cancer can spread. In some cases, this can appear on an X-ray as what’s called a lytic lesion, which is a weak area in the bone due to the cancer destroying the bone’s structure, causing it to lose calcium and other minerals. This may continue for a month or two until something happens—a fall, bumping into a wall, even rolling over in bed—causing the weakened bone to break.

A broken bone often is what spurs patients to go to the emergency room. Weakened bones can be a sign of several conditions, including osteoporosis, so it’s important for your doctors to know your complete medical history and whether you have or have had breast cancer. We can use X-rays and other scans, such as computed tomography (CT) or magnetic resonance imaging (MRI), to see if there’s a tumor or mass on the bone that’s causing it to weaken.

The five-year survival rate, or how many people survive at least five years after receiving a breast cancer diagnosis, often is considered the gold standard of breast cancer care. But survival rates don’t tell the whole story. We’re starting to see relapses of breast cancer much later—10, 15 or even 20 years after the original diagnosis. After a cancer diagnosis, even after the five-year mark, continue to see your oncologist at least yearly to increase the chances of detecting relapses as early as possible.

It’s also important for doctors to proactively test patients who are newly diagnosed with breast cancer, to make sure the disease hasn’t already spread to their bones. Too often, I see women who noticed a lump in their breast and immediately got a mammogram or a CT scan, but no one considered whether they should get a bone scan until much later.

Call 202-877-XRAY to schedule your regular mammogram and stay on top of your breast cancer risk.

Breast cancer that spreads into the bones is considered stage 4, which is the most advanced stage of the disease. Unfortunately, cancer at this stage typically isn’t curable. However, we can treat the symptoms and manage the sites to which it has spread. Patients whose cancer has spread to the bones can continue to live for a long time with a high quality of life with new advanced treatments.

Fighting metastatic breast cancer usually involves a two-pronged approach. The first consideration is local control, which involves treating the cancer site in which the patient is experiencing symptoms. If a patient comes to see me about a lesion on their hip, and I recommend treatment just for that location, that’s local control. Bone typically responds well to local control for cancer because it is one of the few tissues of the body that regenerates to a degree when part of it is surgically removed.

Surgery to remove the cancer and radiation therapy to kill cancerous cells are examples of local control methods I use to treat patients’ bone metastases. Some patients need to have their existing bone strengthened with a metal pin or nail. Others need to have an area of bone resected, or removed, and replaced with a prosthesis.

The second part of our two-pronged approach is systemic management, which addresses breast cancer as a disease that can affect the whole body. We’ve typically used chemotherapy or hormonal therapy to attack breast cancer on a systemic level, and those treatments can be effective. However, particularly with hormonal therapy, the type of cancer can determine the effectiveness of systemic treatment. Some forms of breast cancer involve proteins called receptors that respond well to hormone therapy. Other forms of the disease, including triple-negative breast cancer, don’t have these receptors, which can limit the effectiveness of traditional treatment options.

But that doesn’t mean there’s nothing we can do. Newer treatments are being approved for breast cancer all the time, and others are still in the experimental stage. One exciting new form of treatment is called immunotherapy, which trains the body’s own immune system to target and destroy cancer cells. We’ve seen dramatic results from these treatments, especially in the area of treating triple-negative breast cancer.

Even if it’s been several years since your treatment and diagnosis, the difficult truth is that women must be aware of the risk of their cancer returning and spreading to the bones. Catching the disease at the first sign of symptoms gives us the most options for preventing it from spreading to the bones, and containing it if it does spread.

Do you need to schedule a mammogram? Call 202-877-XRAY or click below.