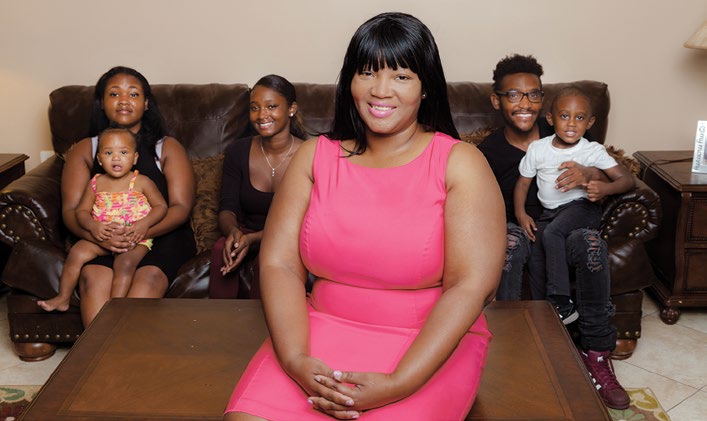 Lakita Thomas, of Washington, D.C., is much more accustomed to providing care than receiving it. After all, she has four kids and two grandkids. But after a month of heavy bleeding, the then-clinical tech at MedStar Georgetown University Hospital couldn’t deny the obvious any more: She needed to see a doctor, sooner rather than later.

So Lakita sought help where so many other women do—at the well-respected Department of Obstetrics and Gynecology at MedStar Georgetown. Staffed with board-certified specialists, the department offers a broad range of services for women at every stage of life, from infertility evaluation, treatment, and management of normal and high-risk pregnancies to perimenopause and menopausal health to gynecologic cancer care.

Under the care of James Benson, MD, a MedStar Georgetown specialist in minimally invasive surgery, treatment of fibroids and high-risk pregnancies, Lakita learned that she had a very large fibroid—a common but benign uterine tumor and one of the most frequent causes of extended heavy bleeding. Unlike women seeking treatment for fibroids in the past, Lakita had her pick of treatment options.

“Patients are often surprised at the variety of fibroid therapies now available,” says Dr. Benson. “Today’s medications and outpatient surgical procedures have greatly reduced the need for abdominal hysterectomy, which was a woman’s only option years ago.”

At 41, Lakita’s best options were hormone pills (birth control) or a minimally invasive, laparoscopic hysterectomy, which permanently ends periods and heavy bleeding. She picked the latter, as do about 20 to 25 percent of Dr. Benson’s other patients.

During the procedure, a tiny incision is made through the belly button, followed by the insertion of a miniature camera to capture real- time images of the fibroid’s exact location and size. Carbon dioxide is then pumped into the stomach, acting like a balloon to push other organs out of the way to create space for the surgeon to see and work. Fibroids and the uterus are removed together, typically through the vagina. Many patients go home the same day, with some able to return to work within two to three weeks.

Because of such advancements, only about 10 to 20 percent of patients at MedStar Georgetown undergo the more surgically invasive abdominal hysterectomy today. Abdominal hysterectomies typically require a three- to four-day hospitalization and up to eight weeks for recovery. That’s one reason why Dr. Benson cautions women not to put off seeking care for abnormal gynecologic symptoms.

“Anyone with fibroids who experiences excessive bleeding should see her Ob/Gyn as soon as possible,” he advises. “There’s no need to suffer. Plus, waiting too long may reduce treatment options.”

Lakita successfully underwent the minimally invasive surgery in February 2015, and woke up with “zero pain.” And she’s very glad she sought treatment when she did.

“Having a laparoscopic hysterectomy was an easy decision—hands down!” Lakita says today. “Dr. Benson was very informative and laid everything out so I could make my choice with confidence. Thanks to him and the staff at MedStar Georgetown, I regained my quality of life!”

MedStar Georgetown offers comprehensive care and treatment for women with fibroids and other gynecological conditions.

To learn more about the Ob/Gyn services available at MedStar Georgetown, or to make an appointment, visit MedStarGeorgetown.org/WomensHealth or call 202-295-0544.